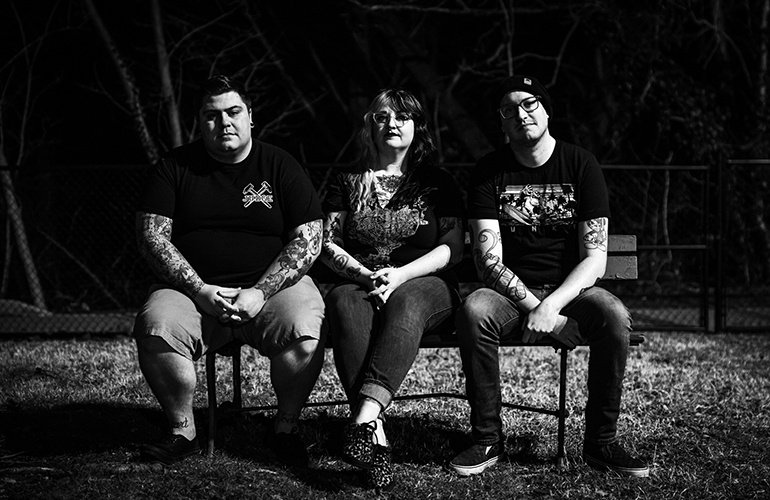 Virginian punks Talk Me Off release music video for Alone In The Dark, the second single off their upcoming EP Abyss. The band have found a unique skate punk sound, drawing on the genre’s classic raw energy giving a new dynamic with dual male/female vocalists.

Alone in the Dark is an apathetically punk song about feeling content with nothingness in the end, neither believing in heaven or hell. The band’s vocalist Holly Herzog says :

“This one’s about the lack of an afterlife and being content with dying.

No more problems. Peace at last. It’s a selfish thought, and one I don’t have often. But passing on to complete darkness, instead of a grandiose fantasy of heaven or even hell, is more appealing to me.”

Hailing from Richmond, Virginia Talk Me Off formed in 2017 when Ryan Cacophony and Holly Herzog met performing in a Screeching Weasel cover band for a children’s hospital charity.

After throwing the idea of starting a new band around, they got Christian Moquin involved. A few months later the band released their first self-titled EP, via Doctor and Mechanic Recordings and Between the Days Records.

Their first album had themes of bad relationships and terrible mental health. There were some East Coast/Canada tours that followed, playing with bands like Off With Their Heads, Night Birds, The Lillingtons, and The Lawrence Arms.

Then, in 2020, they released their first full-length record Cursed after signing to Smartpunk Records, with the help of Say-10 Records and Gunner Records. The pandemic hit as soon as the record was released, which led to no shows but lots of writing.

Their new EP, Abyss, will be released on April 20, 2021, in partnership with Smartpunk Records, Swamp Cabbage, Gunner, and Wallride Records.

Keep up with Talk Me Off on socials…

For more stories check out these…