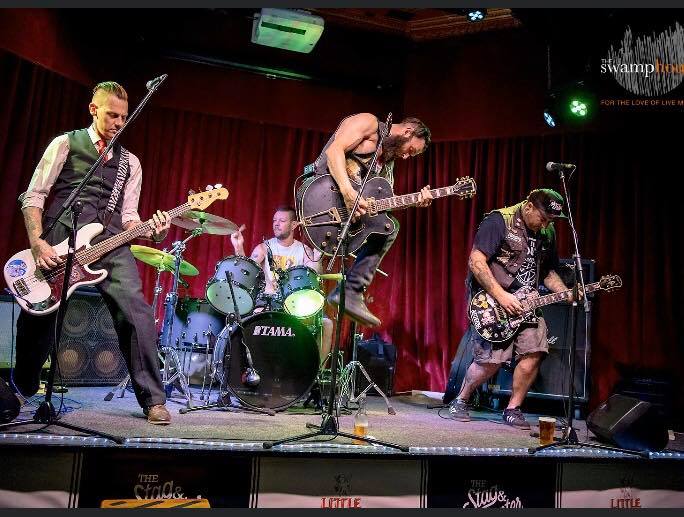 Hailing from Newcastle, Trashed Again have been playing together for the past five years. Taking inspiration from bands like Rancid and Bouncing Souls they invigorate audiences with big guitar riffs, chunky bass-lines and uplifting choruses that can get you up off your seats and singing along. Their live shows are full of energy, gang vocals and dangerous excitement.

As for the name, the band says “Trashed Again as a band name is pretty self explanatory we enjoy having a good time, too many beers and more often than not you will find us at the pub.”

Impressively, they have had the privilege of playing with international acts such as Strike Anywhere, Cancer Bats, Booze and Glory, CJ Ramone, Strung Out, Nick Oliveri and the Svetlanas.

The band is currently working on new music that the band says is due out soon (Covid has slowed the process) and are planning to head down to Tasmania in February 2022 for the first time with fellow Newcastle punks Outer Control.

Now restrictions have finally lifted the boys say they are eager to continue touring up and down the east coast of Australia to make up for all the time lost over the last 18 months.

So how have the boys been coping during this challenging period?

“Over the past year and two lockdowns we were still active! A few shows in Newcastle and the Central Coast but the bigger show we were a part of was Global Bandemic 3 hosted by Jones In The Fast Lane which had 40 bands from 14 different countries – which was awesome to be apart of! Along with writing new material we did get some recording done. We are working on six new tracks which we aim to put out this year and we are going straight back to the studio in 2022 to record even more.

“After a slow year with the pandemic, we’re keen to finish strong and play as many shows as possible! The crowds have been back in force and better than ever with a renewed energy that’s infectious!”

In 2022, the quartet is looking forward to bringing its sound and energy to Tasmania for the first time.

The new year will also see them play at Newcastle’s theatre venue ‘Lizottes’ for the first time with Time on Earth and Imaginary Things with trips to Brisbane, Gold Coast and Melbourne in the works to finish off the Aussie summer. Keep an eye out for dates!

To wrap up 2021, they will be playing the 2nd of December with Sydney’s Stain in Newcastle and then on 10th December with Newcastle’s very own Hack The Mainframe for their annual Christmas party show.

Finishing off the year with a bang, the boys play New Year’s Eve with a show yet to be announced. Keep an eye on their socials for all the details.

Check outTrashed Again’s brilliant 2019 EP ‘Another Way To Fail‘ which is, of course, available on all streaming services.

For more punk stories, check these out…