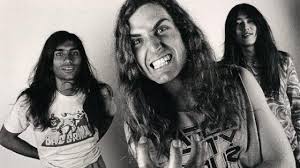 As coronavirus restrictions begin to lift in Australia and the ban on live gigs eases people are realising that concert-going life may never be the same again.

On Friday in Sydney Aussie punk legends the Hard-Ons played a gig to an audience of 50 people – all seated and socially-distanced – with all moshing and dancing banned!

For a band that is used to a frenzied audience they said it was a very surreal experience.

“We haven’t played to a seated crowd since we were a high school band playing to our parents’ friends,” bass player Ray Ahn laughs. “But it doesn’t matter, we just want to play.”

In order to hold live entertainment pubs, clubs and small bars in Australia have to adhere to the “one person per four square metre rule” and everyone has to be seated, with alcohol provided via table service.

At reopened nightclubs in Queensland Australia it’s also law for patrons to remain seated and refrain from dancing. It’s a going to be a strange post covid world!