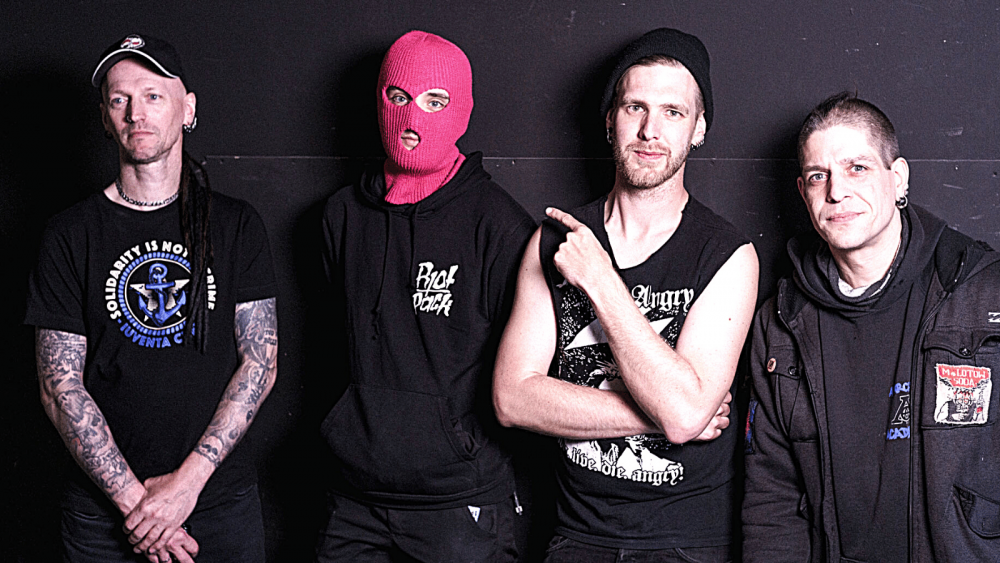 Last Friday (October 22nd) at Berlin’s SO36, and after a pandemic-driven 22-month delay, Northern Germany’s Alarmsignal played their 20th-anniversary concert with the up-and-coming punk band from Leipzig, Dead End Kids, in support.

Our Berlin correspondent Teejay was at the gig and, after the show, spoke to Alarmsignal’s Kühn, Bulli and Yannig about their music, the history of Deutschpunk and of course, German politics.

Teejay: What does punk mean for you now? Has it changed over the last 20 years you’ve been a band?

Kühn: “Punk for me is a way of life, an attitude, and a kind of protest.

Bulli: “For me, punk means solidarity. I don’t live this party thing or have this “no future” attitude. We are not in the ’70s anymore, but Punk is about protest. It’s also no longer a music movement of an older generation; there are a lot of up-and-coming brilliant young punk bands like The Dead End Kids, who supported us tonight.”

Yannig: “For me right now, punk is about being a part of the scene, the whole DIY spirit and learning how to support and empower each other.”

Teejay: Speaking of DIY, solidarity and politics, Deutschpunk is very different from other punk movements. How would you explain your music to someone who is not acquainted with the specifics of German punk?

Kühn: “For us, other punk movements are somewhat strange. The American so-called “conservative” punk movement is so mind-boggling to us; for us, this is not punk. Being right-wing and punk is not possible here in Germany. There used to be some Nazi punk bands in the ’80s and the ’90s, but they were ostracised and banished. Luckily they don’t exist anymore.”

Kühn: “Deutschpunk is not comparable to other punk scenes. The German punk scene is also very fragmented. There is East German punk rock like Schleimkeim, and then you’ve got bands like Slime or Toxoplasma from the West, so Deutschpunk was always very rough and political. But that said, some bands just play for fun. In the ’80s there was this ‘fun punk’ movement in Germany which saw the emergence of bands like Abstürzende Brieftauben, Die Ärzte, Die Frohlix and so on.”

Yannig: “I think as a general rule, Deutschpunk never got technical and musically as good as, let’s say, British or American punk. German punk was always very simple musically. It is more about the message and the attitude behind it. It is also a lot more rooted in the radical left movement than in some other countries.”

Teejay: Who or what has influenced Alarmsignal the most?

Kühn: I think Bulli is heavily influenced by Alarmsignal (everybody laughs). He joined the band later and met us when he was a teenager. He always wanted to play with us.

Bulli: “Hahaha. Not really. I was playing in another band, and then Alarmsignal asked me to play with them. I said, ‘OK, but only for one year.’ Now 15 years later, I am sitting here and trying to speak proper English for Punktuation, haha. When I was a kid in the ’90s, I listened to bands like Slime or Toxoplasma. And also there were all these amazing cheap CD compilations at that time – like Plastic Bomb, Die Deutsche Punkinvasion, Schlachtrufe BRD, that I listened to.”

Kühn: “Yes! Every punk generation grew up with a different German punk compilation CD. Like, I was born when the second Schlachrufe BRD compilation came out.”

Yannig: “I am from the Schlachtrufe BRD number four generation, haha.”

Bulli: “Hahaha. In the German punk scene, you don’t tell your age; you tell the volume of the BRD compilation. My age is Schlachtrufe BRD Five. As far as what’s inspiring our music, I am more open-minded nowadays, so I would have to say a lot of bands, and different situations and experiences make us what we are today.”

Bulli: “What I like about punk is you don’t need to understand the lyrics. For example, I don’t speak a single word of Spanish, but I really love the feeling I get when I listen to Spanish crust bands. They have this anger and this energy about them. I think it is the same with the old ’80s, early ’90s Deutschpunk – it is about the feeling and the energy of the music. The feeling of punk is universal.”

“Back in the ’80s, it was a very different time for Germany. The country was divided politically. In the DDR, punks got imprisoned just because they were punks. They could not afford music equipment, instruments or amps, so they built some kind of amplifiers and DIY-broadcasted their music. But if the neighbours heard their band practice, they were beaten up and taken into custody and stuff like that.”

Kühn: “We recently played in Magdeburg at a venue called Knast (German for prison), and this was an actual prison. A lot of punks in former East Germany were imprisoned there. Nowadays, it is a squat where a lot of concerts are taking place. It is amazing!”

Teejay: Speaking of squatting; the recent events in Berlin – the eviction of one of the last remaining squats, Köpi Wagenplatz in Kreuzberg – it seems like the punks are the last remaining people fighting against gentrification and defending the squatting lifestyle. Would you agree?

Kühn: “I think many people are drawn to this part of Berlin because it is special and offers an alternative way of life. If that part of the city gets gentrified, there will no longer be an alternative, and people will not want to live there anymore, so it is a vicious circle.”

Yannig: “Berlin is well-known for the squatting scene, and it’s part of Berlin’s punk reputation. I feel that there is a lot of resistance to gentrification, but it feels like it’s an unsuccessful battle. One squat after another is being brutally evicted and shut down. It is scary and very sad and makes me feel angry. I would not say that the punks are the only ones resisting gentrification, though. I think a lot of people feel that gentrification is bad, and they are fighting their own battles against it.”

Teejay: Do you remember the Chaos Tage? (The Chaos Days – an annual punk gathering, often violent, held in Hanover, Germany, starting in 1982 and reviving in the mid-1990s. The most well-known Chaos Days took place in 1994 and 1995 and resulted in huge riots and the destruction of cars and buildings.)

Bulli: “The Chaos Days came into existence in the early 80s, and back then, the police started documenting special “punk files”. It was the first weekend of August every year. Some ten years ago, I organised an international punk show in Hannover on the first weekend in August – forgetting that the Hannover police were still on high alert because of the old Chaos Days.

Kühn: “Back in 1984, there was also a united punk and skins picnic in Hannover, and the police decided to beat everyone up. The following year the same happened again, and again, and again, until 1994-95. It grew into a tradition. It was also the first time I got arrested. There is a German punk compilation about The Chaos Days called Krieg der Welten (War of The Worlds).

Teejay: Let’s get back to the music. The new album ‘Ästhetik des Widerstands’ (Aesthetics of Resistance) is coming out on January 14th. What can you tell us about it?

Kühn: “For the first time, we have recorded two songs in English, and we went to school to learn them. Haha. Nah, I am just joking. Every album is a sign of the time, and ‘Aesthetics of the Downfall‘ is a picture of this moment we are currently living.”

Bulli: “‘161’ and ‘Revolutionary Action’ are the two songs we sing in English. We wrote these during the Covid pandemic lockdown, and they’re about the “Querdenker” (‘Lateral Thinker’ – The German equivalent of Q-Anon) conspiracy theorists demonstrations. We wrote these songs against it and against Nazis because the far-right was boiling up again during Covid. “

Teejay: Finally, what German punk bands you would recommend Punktuation readers to check out?

Bulli: Braindead from Hamburg and… do you know what? I will make you a Spotify Playlist.