Tarah Who? Unleashing their own brand of punk on the streets of L.A. 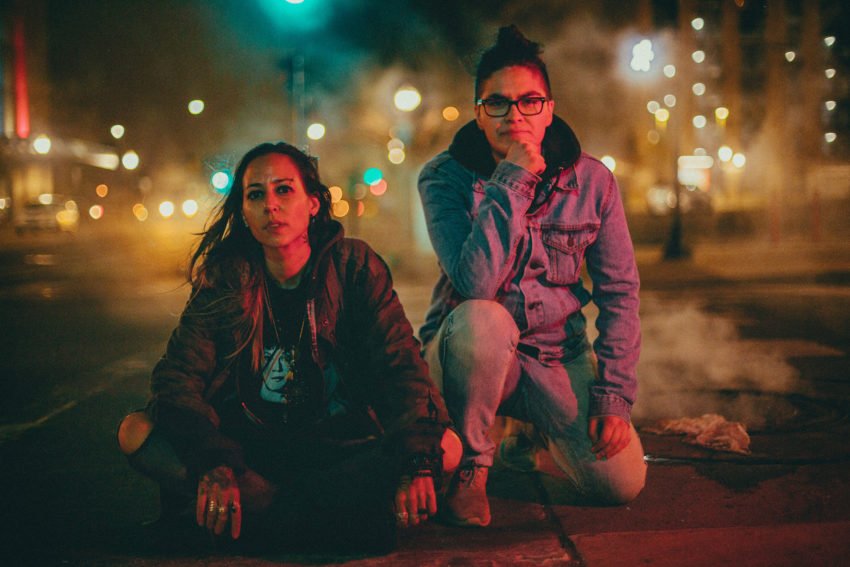 Punktuation’s Tracey Moyle chats to the dynamic duo behind Tarah Who? – the band bringing their own style of punk with a passion for speaking the truth.

Punk rock is an ever-evolving genre, not only in its sound but also in its attitude and courage to say what needs to be said. In Tarah Who’s case, they have oodles of attitude and, along with that, taken a fistful of grunge, laced in some heavy rock, injected punk energy and added some emotionally powerful lyrics – all ingredients that have made Tarah Who one of L.A.’s hottest new bands shaking up the scene.

The US-based, duo fronted by French-born Tarah G. Carpenter and Coralie Hervé on drums and backing vocals, hasn’t wasted the time the pandemic has given them, releasing a new video with their recent single Manners this week.

With a new album due for release in the coming months and the previous single Swallow That Pill making waves, this new brand of grunge-fuelled punk is something we all need on our playlists.

Carpenter moved from France to Los Angeles at 21, with her “musical ambitions and nothing else.” Playing in bands at home (originally as a drummer and bass player), she desired to have her own songs heard.

When she moved to L.A. Tarah, set up a MySpace page and start sharing her music with the world. Tarah kept strong connections with friends back in France and connected with fellow drummer Coralie via mutual Facebook mates.

Coralie moved to L.A. a few years later and reached out to Tarah for advice on life in the Californian city.

Coralie recounts that first contact.“Tarah said, ‘hey, we are having a concert tonight at the Viper Room. Do you want to come by and check it out?'”

Tarah had an ulterior motive for her invitation. She was hoping to convince Coralie to come and drum for her band. There was no need for convincing. It was, according to Coralie, a definite. “Hell, yeah!”

With Coralie onboard, these talented friends brought their own individual influences to create the signature sound that defines Tarah Who?

So where does their unique blend of punk and rock come from?

“I’m definitely a ‘90s person,” Tarah reveals. “Anything that’s grunge or punk or rock, that was my scene. Lyrically, I was influenced by Alanis Morissette when Jagged Little Pill came out, so that’s why I think I just spill my guts.”

When the band are constantly put into a genre, it can be a little frustrating for Tarah.

“People like to categorise things; people like to put us in a box. I don’t want to offend punk, but I think ‘don’t say that’ when people say we are punk. We don’t sound anything like The Clash or The Ramones, but I think it’s from the attitude and energy that we put out on stage.”

Energy is definitely the purest essence of punk, but it’s also what the music stands for, speaking out without fear, and that is how Tarah approaches her songs lyrically.

“I care about emotions when I write. On one of the past EP’s (64 Women), we had a slow song called ‘Hurt’, and for that, I was more into a PJ Harvey sound, dark and slow so that I wouldn’t call that punk. But I don’t really care about the label.”

Coralie embraces her love of rock, “For me, it was more classic rock, like Bon Jovi and Journey, all the ‘80s rock. After that, I went more toward metal. My favourite band is Nightwish. I really love symphonic metal. It’s very different from Tarah’s for sure.”

It’s that mix of influences and own identity that brings a dynamic blast from the band.

With the release of the new single ‘Manners‘, the band were excited to produce a video for the track. The world pandemic may have made it difficult for bands to get quality film clips together, but with that perfectly punk DIY attitude Tarah Who? have come up with a brilliant composed video filmed around L.A. creatively led by cinematographer and music photographer Maria Quintana.

“We love to work with Maria, she is our person,” says Tarah. “She wanted to use an 8mm camera and that’s why it has that colour and that grain. It’s beautiful. It was election day, during covid, we were in downtown Los Angeles wearing masks in between shots. The rooftop was the only way we could be out there without anyone around.”

“She’s always good to work with” says Coralie,” we always say, just do whatever you want we will just follow.”

Tarah emphasises the importance of finding your ‘musical tribe.’

“After so many years working with different people, you finally find your team.” the frontwoman says. “I feel like we’re finally in that stage where we have a strong enough team, we can tell them what the song is about, and they know. Maria knows.”

Manners itself is a thought-provoking track that touches on following your own inner guidance rather than any religious teaching. There is a powerful point coming across in the lyrics – ‘You can be a good person without being religious.’

Tarah tells the story behind the track – “I started writing the lyrics after an incident with my mum. She was born to a German soldier and a French mother. This was a ‘no-no’ at the time. So she was brought up in a foster home and went to a Catholic school and raised by Nuns.

“They taught her well, and she was well-mannered and behaved, but I realised that sometimes she didn’t have that affection, and that’s where things were a little bit off. So that’s where Manners started.

“Then with Black Lives Matters here; to me people raising their bible and going to church and things you hear, it’s not about religion. I have nothing against religion, you just don’t need someone or something to tell you how to love someone. That’s what Manners is about,”

“No, we don’t need your book
or an institution for love,
to teach us, it’s in us,
Ready to use,
Against Fear,
Against Hate.
Let me be your mentor.”

Working together over the pandemic has proven to be a challenge in isolation, but the girls were not only up for it but welcomed it. Recording separately from their homes wasn’t going to stop them from making music.

“Tarah sends me the song when she has a proper structure when she knows where she wants to go with it. And from there, I add my own stuff to it. keeping the feel and the idea for what she wants.”

When it comes to recording music through a pandemic Tarha says you need to get creative.

“I was making demos without drums so Coralie could give me ideas,” says Tarah. “We also had our producer Jason Orme, saying ‘maybe try this, maybe try that’. Then we met for one weekend at the studio, and we thought, ‘alright, let’s just play the songs for the first time and see what happens. So that’s what the recording was about, just trying to play through the songs for the first time. And they worked.”

Humans naturally find a creative way around everything, and there has been no greater teacher of creativity than a world pandemic. “We have to adapt,” Tarah explains. “That’s the interesting thing about how people reacted to Covid. You have people who are depressed. Some are messaging me saying, are you ok? How are you doing? And I’m like, ‘Are you kidding me? I can finally do all of this. I’m using the time now because the second I have to go back to work, I won’t have time to do it. And I like the challenge. Ok, so we can’t play live, so we have to come up with something creative. That’s our job. And I actually find it fun and get inspired by other bands.”

With more new music coming soon, can we expect an album to follow?

“In April we will be releasing a new album,” Tarah confirms. “We will be trying to release a new song and video every month up to the release.”

We are sure their new music will be just as emotionally charged with Tarah’s lyrics coming straight from the heart as they do! We really can’t wait to hear more from this dynamic duo!.

You can listen to Manners now on all streaming services

Keep up-to-date with Tarah Who on socials…

For more great features like this one check these out…