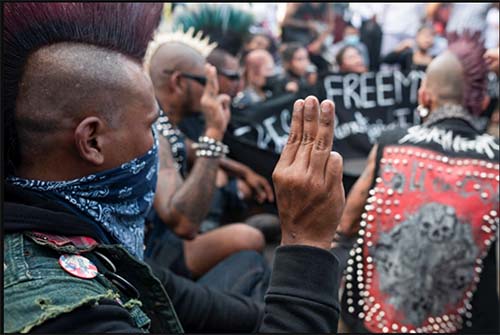 Inspired by protesters in Hong Kong and Thailand, Myanmar’s punks aim to grab the world’s attention as they fight to remove the generals.

“It’s not an easy thing as a woman here in Myanmar,” said Hnin. “You have a lot of restrictions and you are not supposed to be a singer in a punk band.” The tattooed 23-year-old features in ‘One Day’, a video by Myanmar’s foremost hard-core punk band Rebel Riot, delivering seething vocals over the top of a barrage of heavy guitars.

In the background, mohawked and leather-jacketed punks wave red and black flags and raise three fingers, a symbol of resistance derived from popular film series, The Hunger Games, and adopted by Myanmar’s anti-coup protesters.

“We just wanted to create something that can inspire people,” Hnin told Al Jazeera about the video. “This song is meant for this moment.”

Hnin met other members of Rebel Riot in 2015 during student strikes in Yangon. They started hanging out “and somehow I became a punk, I guess.”

Describing themselves as a community more than a band, the collective are known not only for their music but for street-level social initiatives, such as handing out food to Yangon’s homeless.

Hnin says that being a part of Rebel Riot allows her to share her voice, which she says goes against the grain of what is expected from young women in Myanmar.

“But women have anger. They have things they don’t agree on. So, that’s the reason why we are doing this, why I am doing this – to show that it’s ok to be angry, it’s ok to explode and be aggressive.”

Tens of thousands have taken to the streets since the military detained civilian leader Aung San Suu Kyi and seized power on February 1 – the day the country’s new parliament was due to sit. The generals have declared a year-long state of emergency and promised new elections, but have given no timeframe.

The protests have not only featured mohawked punks, but also young people dressed as ghosts, superheroes and anime characters. Marginalised groups including the LGBTI community have also played a prominent role.

Hnin said young people in Myanmar are connecting with the rest of the world through social media apps such as Twitter, Facebook, Instagram and Tiktok, and have been inspired by similar protests led by young people in Thailand and Hong Kong.

“We have something to look up to. [What] the young people in different places in the world are doing. And we can do the same. We can change things. I think it’s really inspired young people [in Myanmar].

Hnin said that, along with democracy, Myanmar needs young people to be involved in politics, “so they have fresher ideas and creative ways. [Young people] have a more open view to the world.”

It is a sentiment shared by Rebel Riot founder Kyaw Kyaw.

Kyaw Kyaw discovered punk music when he was 17 years old after buying a DVD from the Yangon market. He said seeing the bands, the clothes and the attitude inspired him to create Rebel Riot.

It is not the first time punk has intersected with Myanmar’s politics.

In 2012, Aung San Suu Kyi called on the Russian government to release members of the all-girl punk group Pussy Riot whose members had been imprisoned for two years for staging an anti-government protest in Moscow’s pre-eminent Orthodox cathedral.

Having herself only been released from long-term house arrest in 2010, Aung San Suu Kyi stated at an Amnesty International conference, “I don’t see why people shouldn’t sing whatever it is they want to sing.”

But it may be that even the once-hip Aung San Suu Kyi has passed her use-by date.

While remaining hugely popular in Myanmar – as evidenced by the November landslide electoral victory that the military has claimed was rigged and used as a pretext for the coup – the average age of the National League for Democracy leadership is more than 70 years old.

Army chief Min Aung Hlaing, who led the coup, is also about to reach the retirement age of 65.

“For many young people, supporting the NLD will have been a compromise but now they are letting their voices be heard,” said Ronan Lee, a scholar on Myanmar politics, and the author of the new book, Myanmar’s Rohingya Genocide.

“Before the coup, the NLD’s leadership was ageing so young people will now expect rapid generational change within the party.”

The role of social media in organising the protests has also been noted by the military, who have shut down the internet to try and stifle social media.

“Through the massive anti-coup protests, Myanmar’s young people have demonstrated the strength of their political commitment and their excellent ability to organise and mobilise large numbers of people,’ said Lee.

“The NLD needs to embrace Myanmar’s young people and give them a meaningful voice in a future civilian government.”

Whether punk rock will influence the outcome of the current political situation remains to be seen, especially with the threat of mass arrests.

Grammy-winning punk rock singer Henry Rollins says: “I think Rebel Riot is using the vehicle of music to put a message across is punk rock in its purest form and optimum application.”

Having visited Myanmar in 2008 in the wake of Cyclone Nargis, Rollins said that “it doesn’t surprise me at all that punk music would have an appeal anywhere in the world” including Myanmar, which has existed largely under a military dictatorship since 1962.

He said punks have always faced harassment from authorities, including himself while singer of the punk band, Black Flag.

“I think Rebel Riot is using the vehicle of music to put a message across is punk rock in its purest form and optimum application.” Henry Rollins.

But he said that the harassment experienced by punks in the United Kingdom and United States was “was nothing like what truth-tellers and those questioning established authority systems like in Myanmar and Russia face. Not even close.

“The situation wasn’t so extreme that you risked arrest and worse for merely having an opinion. Rebel Riot or Pussy Riot put far more on the line, at far greater risk than I ever had to,” he said.

“I think it’s great that these young people are putting outdated and otherwise cruel and authoritarian power structures on notice that their time is coming to an end.”

She said the band created the new video “so that people can see what’s going on and what we are doing here and inspire people in some way.

“Right now, all the young people are participating in the protests. They are really wanting to change. I think that’s what everybody hopes for,” she said.

If ya liked this, you will love… 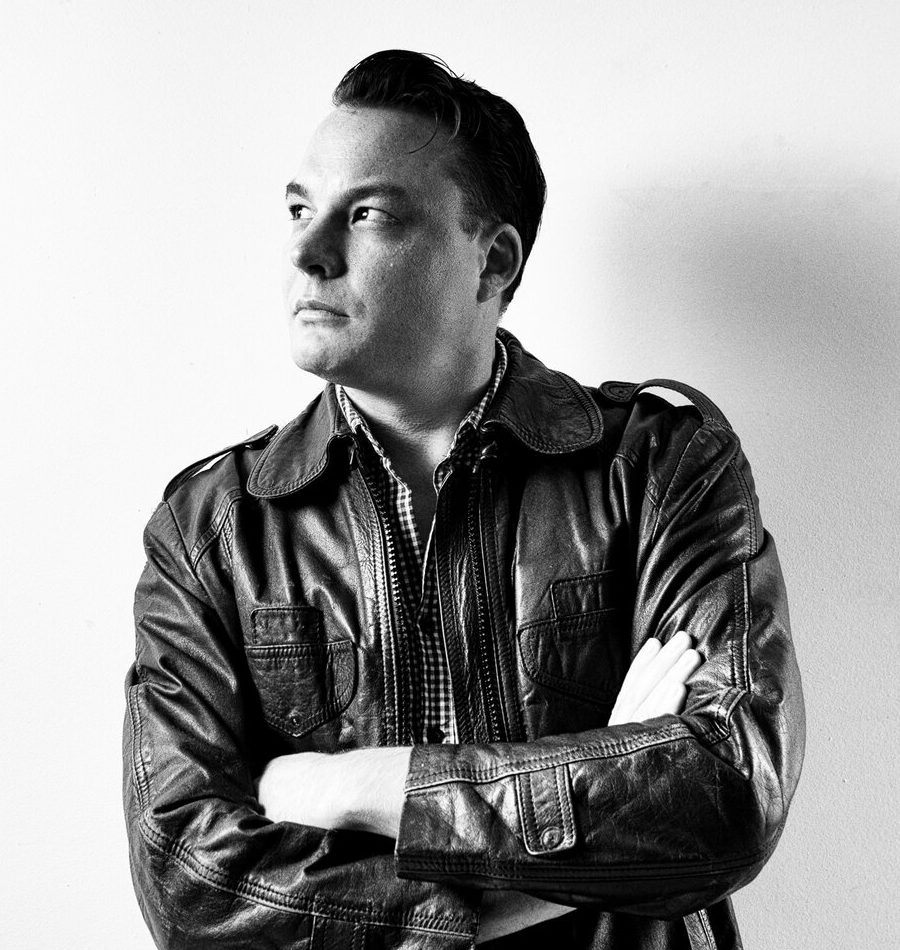 Ali MC is a Melbourne-based writer, photographer and musician whose work takes him around the globe. Passionate about people, culture and politics, his work often explores little known aspects of the world around us. His writing has seen him document a range of international human rights issues for publications such as Al Jazeera, SBS and the Guardian, as well as producing the full-length ‘punk rock travel book’, The Eyeball End.