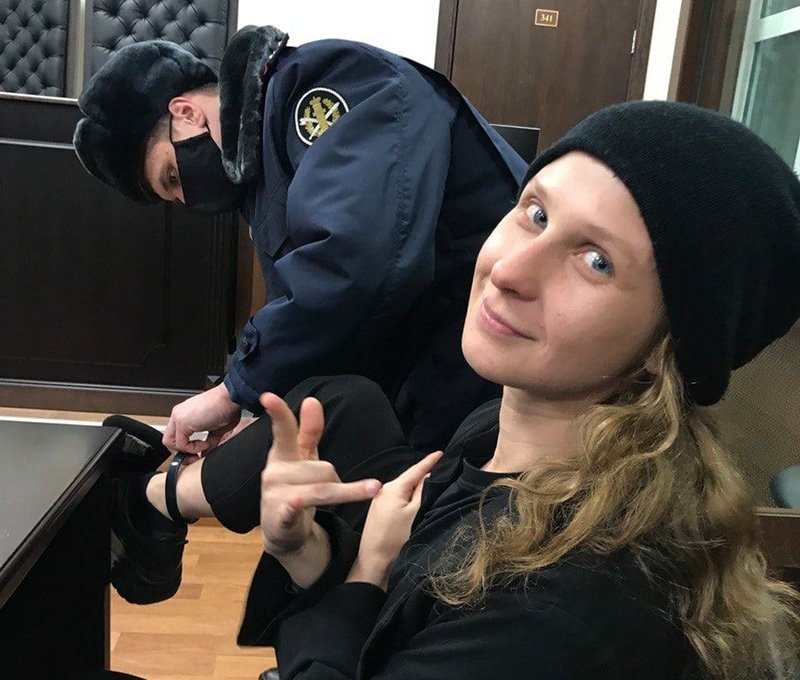 “Pussy Riot’s Masha Alekhina is still detained,” Pussy Riot, stated on Twitter on Jan 29. “She faces criminal charges and two years in jail for encouraging people to go to protests on social networks. This is the face of Putin’s Russia. They clearly have nothing else to do, but to put Pussy Riot in jail over and over again.”

Yesterday (Jan 30) Alekhina revealed that she is still imprisoned. Writing on her Facebook page she said:

“I am now being judged by a closed court, and they want to deprive me of the opportunity to publicly speak out only because Alexei Navalny and his associates in the Kremlin, openly talk about Putin looting billions.

“Because the truth is ours we are not afraid. Freedom to political prisoners. Freedom to us. Freedom of Russia.” Masha Alekhina, Pussy Riot

“They are scared of us who just speak the truth. They come to our houses with searches, and they won’t release me using crazy arguments. Allegedly I can escape from the country (with a passport seized) or I can “influence” the investigation through government officials. I’m not friends with government officials. And I’m not going to run away. This is my country.

“Because the truth is ours we are not afraid. I’m not afraid and ready to sacrifice my comfort for the freedom of my country. Freedom to political prisoners. Freedom to us. Freedom of Russia.

Her bandmate and Pussy Riot Founder Nadya Tolokonnikova has told MSNBC that she is very emotional about her friend’s arrest.

“It’s deeply emotional to me because Masha is arrested seriously for the first time since 2012. In 2012 we were arrested and put in isolator, the same isolator where Masha is detained currently. And this is not one of the ‘normal’ arrests that is happening to us every day in Russia – it is a serious arrest… and she is facing 2 years in jail and for me this is ultimately my deepest nightmare.”

Alekhina was among more than nearly 4,000 people detained at last weekends demonstrations held across Russia in support of jailed opposition leader Alexei Navalny – one of Putin’s most prominent critics.

“It is a serious arrest… and she is facing 2 years in jail, and for me, this is ultimately my deepest nightmare.” Nadya Tolokonnikova, Pussy Riot

Navalny was arrested on his return to Russia from Berlin, where he was being treated for a near-fatal poisoning he alleges was carried out by the Russian government.

Mediazona – the independent media company founded by Pussy Riot and Russian journalists in 2014 – reports that they are now being kept under house arrest, ahead of today’s planned protests.

Pussy Riot has also shared news that Mediazona editor-in-chief Sergey Smirnov has been arrested while out walking with his young son, accused of “inciting”.

Being arrested for standing up for her beliefs and airing her political views is not new to Masha Alekhina. In December 2020, Alekhina was involved in a protest against police brutality that saw Pussy Riot’s Rita Flores sentenced to 20 days in jail.

In October, on Putin’s Birthday, she was arrested for her involvement in the group’s rainbow flag protest, which saw protesters plant Pride flags outside government buildings to highlight the Putin government’s treatment of LGBTQ+ people.

Alekhina was also arrested in 2012 for “hooliganism motivated by religious hatred” when Pussy Riot performed at Moscow’s Cathedral of Christ the Saviour. She was sentenced to two years in a harsh forced-labour prison but was released after 16 months, due to international political pressure.