Los Cogelones: When The Aztecs and Punk Collide 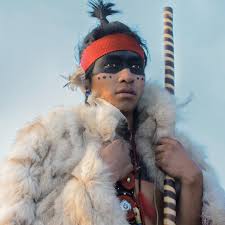 Punk band, Los Cogelones (roughly translates as The Fuckers) formed in 2008 when four brothers Marco Antonio, Víctor Hugo, José Alberto and Jesús Adrián Sandoval decided – with tongues firmly in their cheeks – that they wanted a life of “sex and drugs and rock ‘n’ roll”

However, what began as ‘just four brothers jamming together” started to take on a momentum all of its own – especially when they fused their love of punk and their passion for keeping indigenous Mexican tradition alive and relevant for today’s generation.

The brothers, wearing traditional Aztec outfits, thrash out their songs mixing electric guitars and the fury of punk with traditional instruments such as the huéhuetl (a tube-shaped drum used by the Mayans) and sing in a combination of Spanish and the indigenous Nahuatl language.

“Our songs incorporate prayers like our Mexica (Aztec) grandparents did, and we integrated traditional instruments into this mix of our present and native past,” drummer Marco Sandoval told AFP.

The brothers were brought up in the El Sol neighbourhood of Nezahualcoyotl and when growing up the roads there were still unpaved and the houses made of flimsy sheets of metal. Neza, as it is known, is said to be a place that grows from adversity. It is a tough place to live in. It has a high crime rate, violence and murder are commonplace and the town is lacking even in the most basic services.

The harshness of life there is reflected in the songs of Los Cogelones. The lyrics speak about indigenous peoples history and cultural heritage and the injustice and discrimination many indigenous people of Mexico experience on a daily basis.

Lyrics roughly translate as: “Motherfucker, a word that accompanies the rage you planted. Now you’re demanding that we stop screaming. Stop looking for what you took from us. Is there any feeling inside you that might want to help me? Everything will change.”

This gritty, edgy and truly unique punk band is well worth checking out!

The album is available now on all platforms