Lookout… for a Lookout reunion show featuring The Mr T Experience, The Queers and more! 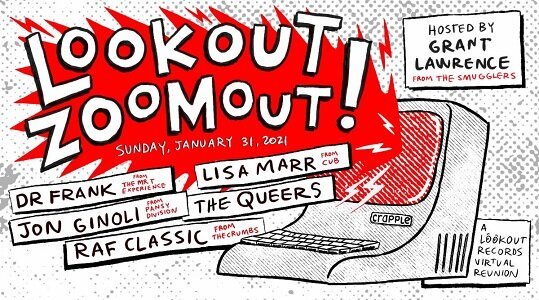 In these turbulent times when we need a model of community, friendship, and coming together, legendary punk label Lookout Records has stepped up to the plate to provide a monthly online performance series throughout the year. Dubbed the Lookout Zoomout, the first show is scheduled for January 31st and will feature members of The Mr T Experience, Pansy Division, The Queers and The Smugglers.

These reunion shows will showcase the array of bands and artists that have graced the Lookout rosters over the years, although there is no word yet if this will include some of the label’s most famous graduates such as Green Day.

Lookout records was an influential and iconic West Coast independent punk label founded by Larry Livermore and David Hayes in 1987. Between ’87 and their closure in 2012,

Lookout had nurtured an impressive amount of talent including Operation Ivy, The Donnas, Screeching Weasel and Bratmobile to name a few.

Smugglers frontman Grant Lawrence (who will be hosting the shows) is clear about the reputation of the label:

“If your band was lucky enough to land on Lookout Records like ours did in the 1990s, it felt like winning the lottery. It was an incredible community of artists, bands, and friends. It didn’t end well, but there were some amazing times and some really, really great records while it lasted.”

The event is being livestreamed via the Side Door Access platform and tickets are limited. More info on purchasing tickets can be found here: