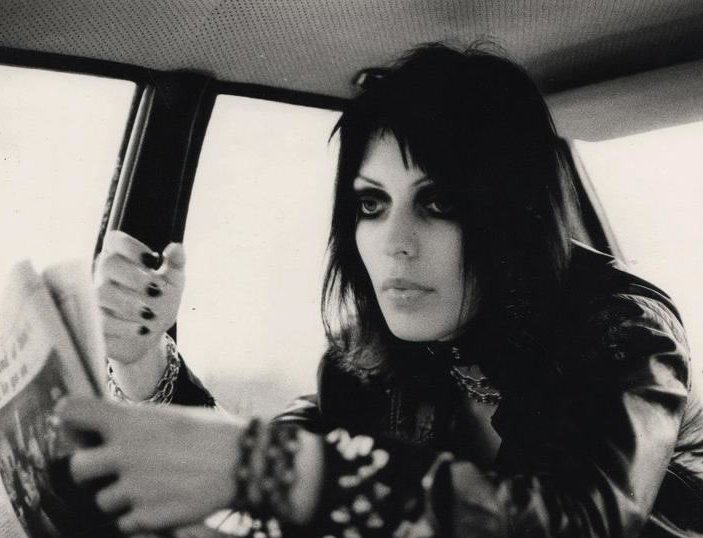 Punk icon, Gaye Black (a.k.a. Gaye Advert) talks to Punktuation! about the Sid glassing incident, how the Stranglers gave her her stage name and how today art is her life!

She was there at the Sex Pistols’?Screen on the Green gig?which also saw the first Clash gig. Was a regular at the?Stranglers’ 1976 residency at the Nashville Arms?in Hammersmith and has the badge to prove it! And was at both nights of the beyond-legendary?100 Club Punk Rock Festival in 1976, where on 21 September while the Damned were playing, Sid Vicious was caught up in the infamous glassing incident. (He threw a beer glass and it blinded a young woman in one eye.).

Gaye Black’s punk experiences are second-to-none. If only she could remember half of these amazing events!

“The other day I was asked in an interview if I went to both nights of the 100 Club festival and I had to admit I couldn’t remember,” she laughs.

“So I called a friend who said yes I was. I didn’t know you then but you were definitely there. We didn’t have cameras or social media to record everything back then, so I’m still piecing together some memories from those amazing days.”

Born Gaye Black in August 1956, she was dubbed Advert by The Stranglers during that Nashville residency, when she would get on the guest list as she was on the scene, seeing them every week. ‘I said my name was Gaye and they wrote down my name and said it was an advert for identification purposes’).

She left home in Bideford, Devon at 20 with her boyfriend and now ex-husband?TV Smith?(The Adverts lead singer) and now calls London her home – and Punktuation! speaks to her at her home ‘or in my studio if you like.’

Art has taken over her life, where playing music has taken a back seat. She can no longer play the bass for which she was famous for on such hits as Gary Gilmore’s Eyes, No Time to Be 21, and One Chord Wonders due to osteoarthritis of her thumbs.

“The pain comes and goes. At the moment it’s ok,” she says.

But lung disease has had her well and truly locked down.

“I’ve not been on public transport since March. I’m in the Government’s vulnerable category so have to be careful,” she says.

“Other than daily walks outside and trips to the shops I’ve had to stay in.”

And being a gig addict like in the late 70s heyday, she’s missed her gigs and is itching to get going to one again.

“I’m always going to shows and supporting my friends in bands. I saw?UK Subs?at the 100 Club recently. I always put up Alvin (Gibbs), the bass player, as he comes from France. When it’s sold out these days, it’s not as rammed in the 100 Club as it was in 76, I suppose for health and safety reasons. I didn’t see the Sid incident as it was so rammed.

“The last gigs I saw was?The Phobics at the Pelton Arms in Greenwich?on 8 February and the?Luminous Bodies and the Casual Nun at the Lexington in King’s Cross?on 21 February.

“Then lockdown came and that was it. Thank God a friend was able to set me up with Netflix and Amazon Prime.

“I was in two art shows when Lockdown came and the pieces are still there – but you just can’t get to them. One of them is moving to Amsterdam so people might be able to see that. I showed a cross-section of painted canvas, collages and a couple of things in bell jars

“I love horror movies and they inspire my art. How do I describe my art? It’s dark, a bit creepy, grotesque in places but with contrasts -it has an unlikely mix of things. I try to grow old gracefully but I tend to fail when I start on my art.

“I have vivid dreams but not so many lately as some people are through lockdown. That’s just me being different as I usually am!

“How do I describe my art? It’s dark, a bit creepy, grotesque in places but with contrasts -it has an unlikely mix of things.” Gaye Advert.

“I have a habit of not throwing things away. I have a memorabilia section on my?website, but still have lots that I’d never part with. Like my collection of Stranglers badges. I’ve got one which says ‘I Was A Victim of the Stranglers at the Nashville December 1976’. I’ve kept a couple of trayfuls of badges from back in the day. Probably worth a small fortune.

“I’ve got a thing about saving things when most people throw them away. I collect bones when I’m out on the river shore, so sometimes you might see me there, finding things to put to good use in my art. I don’t live far from the River Thames but it’s not the best part for finds.”

Gaye had done three years at art college and was reading about punk in the music papers when she decided in 1976 to go and see for herself.

Within weeks The Adverts were formed and catapulted to being among the punk pioneers – but what is their legacy?

“We didn’t necessarily get the credit we deserved. We were lucky that the conditions were favourable when we started,” she recalls.

“But people are still praising our music and talking about it even now. At the time we got some bad reviews which said we couldn’t play and even now I prefer listening to more basic music.? And the second album (Cast of Thousands) was a bit of a departure for us but now everyone is raving about that one.

“Our tastes change as we get older, and to my horror I discovered a couple of colours I like now, which I never used to. I wouldn’t’ have looked twice at them some years ago. Now I like them. I’m getting less narrow-minded I guess.”

Apart from gigs in London, Gaye is a regular at the?Rebellion punk festival, held each August in Blackpool. She gets involved with the art exhibition which runs alongside the multitude of live acts of a hot and sweaty weekend.

She tells Punktuation: “We’re chatting on what would have been the end of Rebellion, and thousands of punks would have packed into their cars like sardines and headed off home. It’s a seven-hour journey for me, Imagine that during this heatwave?”

Gaye is hoping to show some of her artwork at Nestival, at the Bird’s Nest pub in Deptford, South London, on 27 August – if COVID allows it to go ahead. “Might see you there,” she smiles.