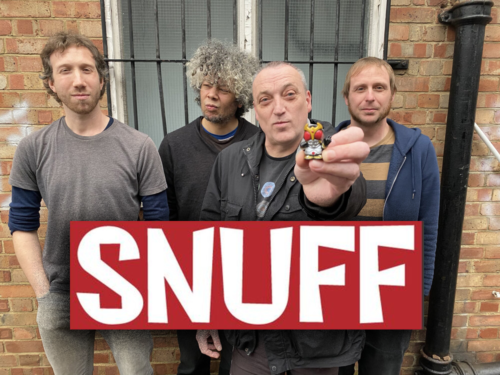 Snuff – a folk band for the ages. A punk band for the Millennium. Making music for music’s sake. Wholly independent and self-sustaining.The punk/mod men of Harrow in a direct timeline from the sharply dressed hoochie-coochie blues and soul gentlemen of Chicago and Detroit.

Duncan Redmonds is a storyteller and observer following on from the British folk tradition of Richard Thompson, and Martin Carthy set to a punk Motown beat that is revered in certain circles but misunderstood in polite society. Raucous songs of modern folk tales.

Each story unfolds independently as you listen to their punk soul blues on the new album, such as in Green Glass Chippings and the cover of Curtis Mayfield’s Hard Times. Over two years in the making, the band started work on new material, taking new song ideas back to the format of a three-piece lineup – and then bringing the organ and trombone into the mix much later once the songs were up and running.

The lockdowns of 2020 held up some rehearsals, but the ideas would keep coming, and the songs kept developing. Sometimes even down at the park where Snuff entertained the local dog walkers.

The crowd’s reaction to the new stuff was superb! Finally un-caged in 2021 and fully able to rehearse at their local venue, The Trinity in Harrow, whilst it was still closed for gigs, Snuff was back on track again. Fast, angry and loud, ready to visit Perry Vale Studios with Pat Collier (The Vibrators), who manned the record buttons.