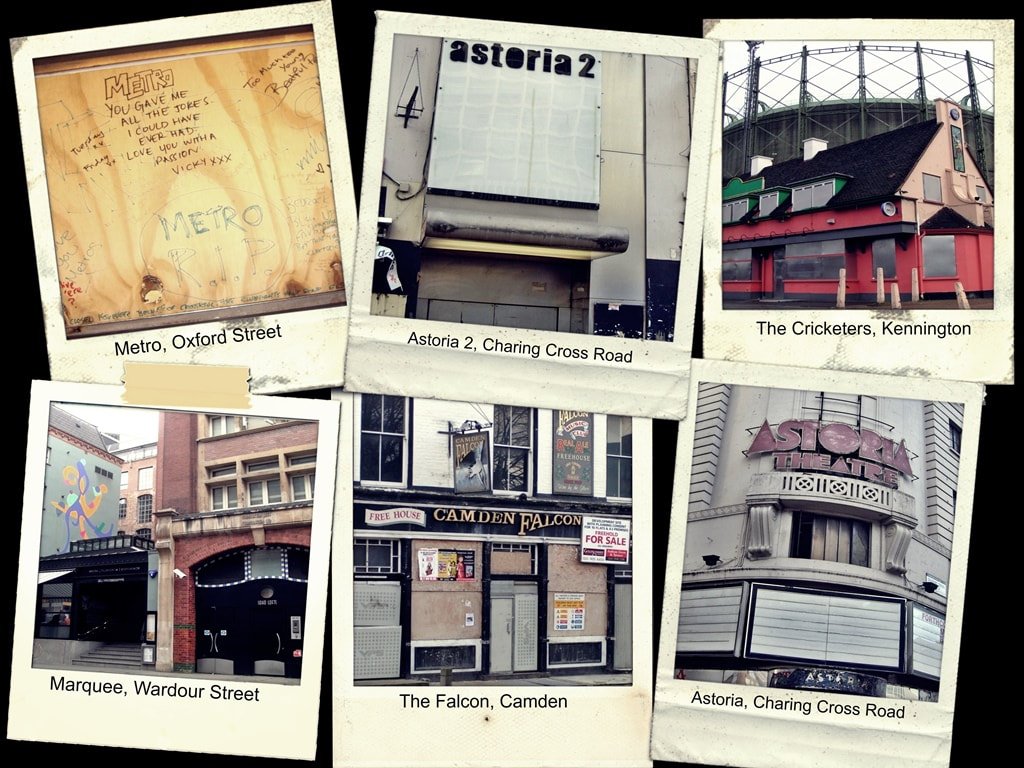 Remember the Tally Ho pub? The Rainbow Theatre? The Vortex? The Roxy? What venue do you miss the most? A new book by Paul Talling is a reminder of what we have already lost.

In my twenties, there was a pub not too far from where I lived that, under normal circumstances, would have been seen as an incredibly unpleasant, dingy and dangerous place to have a pint, but to the people who frequented this dive – The Tally Ho in Kentish Town, London – it was more a rock’n’ roll icon than a pub.

Ian Dury’s Kilburn and the High Roads, Joe Strummer’s 101ers, Eddie and the Hot Rods, and Dr Feelgood, who all were vital to the UK punk scene, played there. It was London’s equivalent of New York’s CBGB. It’s gone now. Replaced by a new development of 33 residential units and 600 sq feet of retail space

London’s Lost Music Venues is a brilliant guide for anyone interested in finding the original sites (like the Tally Ho) where London’s postwar music history began.

“I’ve always loved music,” the book’s author and London walking-tour guide, Paul Talling tells Punktuation! “But over the years I started noticing all the amazing venues I use to go to disappearing. I just wanted to document them – we can’t lose the music history of these sites.”

“Some journalist call what I do Psychogeography. Crap! I basically just like like wandering around. When you do that you discover so many amazing places.”

Paul, a punk at heart, used to work for the Housing Association but gave that all up to follow his passion and set up his own London Walking Tours company. “Like punk, you just ‘do what you wanna do’. I just made up my own posters started putting them up. I had no plan, it wasn’t organised, it just happened and things took off”

London’s Lost Music Venues is the first book from Damaged Goods Books, the new publishing arm of the indie record label Damaged Goods, known for its vinyl re-releases from bands such as Slaughter and the Dogs, Adam and the Ants, and Buzzcocks.

Featuring photos, adverts & tickets, this book is a portal into the past… back to the city’s jazz, blues, folk, rock, punk, and indie clubs halcyon days.

Another volume is on the cards for late next year “This time with some of the smaller iconic venues that didn’t make this book,” Paul concludes.

This is the club where on New Year’s Day, 1977, the Clash were headlining at the opening of this iconic punk/new wave venue. Among the regular bands to follow them, there were Siouxsie and the Banshees and X-Ray Spex.

Don Letts DJ’d at the club playing reggae between bands, because in part, there were so few punk records to play at that time. Sadly, within a year, the Roxy closed, and upset fans squatted the building in protest at its closure. Today it is the location of a Speedo sportswear shop.

The Vortex, like The Roxy, also opened in 1977 and is mentioned in the lyrics of ‘A’ Bomb in Wardour Street by The Jam. Bands who started their careers at the Vortex include the Slits, 999, the Boomtown Rats, the Buzzcocks and Siouxsie and the Banshees. The club was co-owned by Andy Czezowski who was also a co-owner of the aforementioned Roxy. The last gig at the Vortex was Tubeway Army in 1978. The Vortex is now the Nova Club below Dirty Harry’s of Soho.

The Marquee Club had a long history as a music venue. It was first located at 165 Oxford Street in London when it opened in 1958 as a Jazz club. Its most famous period was from 1964 to 1988 at 90 Wardour Street in Soho and it finally closed when at 105 Charing Cross Road in 1996.

Although never solely a punk  venue, the club nevertheless regularly had punk and new wave nights. Bands such as the Sex Pistols, the Boys, The Stranglers, Chelsea, Generation X and Adam and The Ants all stood on the famous stage.

You can now order Paul’s book by clicking the Link icon above or you can order it from any local book stores worldwide.