London Punks Out Of Love Salute The Animal Kingdom 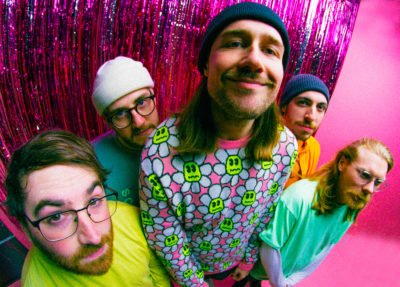 London punks Out Of Love are pleased to reveal the video for their new single ‘Dog Daze’ which is out now on all digital service providers. Dog Daze is the third single to be taken from their recently-announced forthcoming second EP.

Commenting on the track, frontman Jack Rogers said: “I’ve always wondered what the world would be like if we loved like animals or loved each other as much as we love our pets. This song is for the animals and dedicated to the dying concept of pure devotion and unconditional love.”

To coincide with the release, the band are delighted to share a run of limited edition dog tags raising money for registered charity Animals At Risk Shelter – a Luton based cat and dog shelter that takes in vulnerable animals to provide them with care and support:

“Animals At Risk Shelter is a local charity to us that works to rehabilitate and rehome animals from neglect and traumatic places. They operate a no-kill policy and ensure every animal that passes through their organisation (500 – 600 a year) gets the love and attention they deserve!”

You can buy your tag here:

With a grunge-tinged punk sound that fans of Culture Abuse, Gnarwolves, Drug Church, and Milk Teeth will find plenty to revel in, the band made a huge splash (no pun intended) when they dropped their incredible, and very wet, music video for ‘S.L.U.M.P’ back in February of 2020 – the track was picked up by BBC Radio 1 and Kerrang! Radio, and soon enough Out Of Love were the band on everyone’s lips, with coverage from Rock Sound, Kerrang! Magazine, DSCVRD and more.

“I think we capture that energy and ethos of all the hardcore bands we love mixed with the catchy nostalgic hooks we grew up on,” says Rogers, namechecking the likes of Green Day, Descendents, Sonic Youth, and Nirvana as key influences.

Their 2020 debut EP I Am Not Me was released in July 2020 and contained four grunge pop anthems about growing up and finding meaning on this deeply problematic planet we call home.

More Out Of Love