Life after anarchy! You’ll never guess what these punks are doing now! 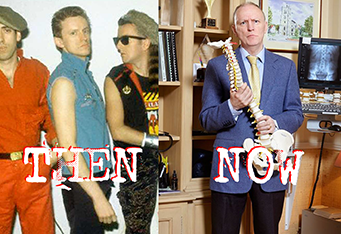 Did they fall off the face of the earth? What are they doing these days?

The 1970’s was an iconic period in music, producing some of the most influential punk bands of our time. It was a time of anarchy, rebellion, calling out politics, women’s rights and basically rejecting the excesses of the mainstream.

The music was raw and stripped down with songs driven by political climates and anti-establisment views. The world changed because of these young fearless, pissed off musicians and they influences a plethora of bands that followed. But where are they now?

Some are still firmly embedded in the industry, some left this world too soon. Some took a turn in a direction you probably would never have imagined.

Here we take a look as some of those significant musicians and where their journey has taken them. Mostly far beyond the wild days of anarchy in the UK.

Who: Terry Chimes
Then: Drummer With The Clash
Now: Chiropractor

The Clash‘s original drummer Terry Chimes always, “just wanted to play music”. He also always wanted to be a doctor, but music won over in his early years. A self-taught musician he joined The Clash before they even had a name. On meeting the band he said “they were like a gang” but also “it wasn’t just about music, but about radical politics and an alternative lifestyle.”

After 15 years in music, including stints with Hanoi Rocks and Black Sabbath, medicine still called: “I felt it was time to completely change and over the time I’d been a musician, I’d already become a non-drinking, non-smoking, non-drug-taking vegetarian who does yoga.”  recalls Chimes.

“I felt it was time to completely change and over the time I’d been a musician, I’d already become a non-drinking, non-smoking, non-drug-taking vegetarian who does yoga.”

In 1988 Terry became a full time student of Chiropractic medicine. With a successful Chiropractic practice in Essex he has no regrets leaving music behind, saying “Getting people well and making them happy; I don’t think I’ll ever want to stop doing that”.

Who: Paloma McLardy (aka Palmolive)
Then: Drummer: The Slits, The Raincoats
Now: Spanish Language School Teacher in The U.S.

The Slits founding member Paloma McLardy, aka Palmolive, may have only had a two year stint with the ground breaking all girl punk band but the influence of The Slits is still felt today. Her passionate and energetic drumming style led her to another prominent punk band the Raincoats – performing on their first album.

After leaving music behind, setting off on a pilgrimage to India, she eventually settled in the US where she has lived since 1989. From there, in a complete paradoxical step, joined a controversial extreme right-wing Pentecostal church.

“I feel like a punk mystic, if there’s such a thing.” Paloma McLardy

McLardy is no longer with the church but still embraces religion. She now a teacher, has a BA in American Studies and teaches children Spanish – her native language. McLardy recently said “I feel like a punk mystic, if there’s such a thing. I don’t want a pastor. I don’t want someone telling me how I should make my personal journey.”

Who: Feargal Sharkey
Then: The Undertones
Now: Environmental Campaigner

Feargal Sharkey was once the voice of Northern Irish pop-punk band The Undertones. Now his voice as an environmental campaigner has taken the limelight over his music.

The Undertones emerged during the 1970s, when ‘the troubles’ – which tore Northern Ireland apart – were at their height, but the band’s music offered young people a respite from the gloom of violence. Hits that included Teenage Kicks and My Perfect Cousin launched them onto the tour circuit, alongside bands like The Clash.

“We can’t continue this decimation of 85% of the world’s chalk streams. They’re our Amazon rainforest.” Feargal Sharkey

In 2010 he received an honorary degree from the University of Ulster in recognition of his services to music. But it’s his work as an environmental campaigner that has him shining his light in the world today.  Sharkey has become something of an expert on chalk streams.

“We can’t continue this decimation of 85% of the world’s chalk streams,” he told The Guardian . “They’re our Amazon rainforest. If it was some other country doing this, the UK would be at the bloody UN shouting and screaming.”

In 2019 Sharkey received an OBE in the Queens Birthday honours for his environmental work.

Punk Saxophonist Lora Logic (born Susan Whitby) has worked with some of the most influential musicians in punk and otherwise. Briefly a member of X-Ray Spex, she went on to form Essential Logic and has contributed to songs by The Raincoats, The Stranglers, Kollaa Kestää and Boy George. Her saxophone provided a unique quality to any music she was a part of.

By the early ’80s she found herself wanting a change. She left the music industry to join the Hare Krishna religion. Moving to Bhaktivedanta Manor, a mansion donated to the Hare Krishna movement by George Harrison. She married her husband at the Manor and moved out to the English countryside to bring up their daughters.

“The deep-rooted timeless ancient spirituality of India has alway been very close to my heart.” Susan Whitby (Lora Logic)

in a rare interview she gave to Mike Applestein she said that moving to India with her family, was a life changing time stating: “The deep-rooted timeless ancient spirituality of India has alway been very close to my heart.”

Who: Peter Bywaters
Then: Peter and the Test Tube Babies
Now: School Teacher

When Peter Bywaters decided to form a punk band in 1978, he didn’t expect the impact Peter and the Test Tube Babies would have. With Radio 1 DJ John Peel pushing their first ever recording Elvis is Dead they became one of the hottest unsigned bands in the UK overnight. Success escalated with their single Banned From the Pubs, life becoming a whirlwind for the band. They quickly cemented their status as one of the most brilliant and funniest live bands in punk rock culture.

For the last 20 years (in-between The Test Tube Babies tours) Peter has been working as a TEFL and TESOL teacher for English Language Homestays. He welcomes, adults, couples, boys and girls to his homestay tutoring, understanding different cultures having travelled widely over the years.

The band have recently released what has been cited their best record to date ‘FUCTIFANO’ (a phrase you may hear from a Scotsman whilst asking directions). Good to see they haven’t lost their sense of fun.