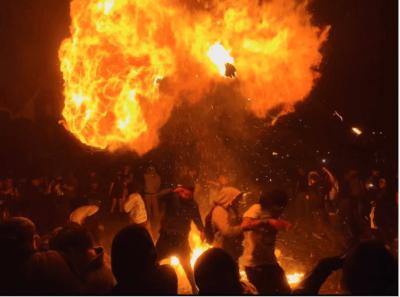 The LAPD breaks up an ‘illegal punk gig’ under a freeway at Cyprus Park, LA, using tear gas and ‘less than lethal rounds’.

A punk show under a freeway in the Cypress Park section of Los Angeles got violent on Saturday night when the LAPD turned up to disperse the gathering. The secret show featured local acts Dead City, Barrage, Wacko, N8NOFACE, Section H8, Clorox Dream, Self Sabotage, and Alpha & Omega.

Photos on social media posts from the punk gathering show a bunch of music fans having fun, but KTLA reports that “some revellers set off fireworks while others disrupted traffic.” The LAPD issued a “citywide tactical alert” to disperse a large crowd. The event took place in Egret Park, which is by an overpass and according to the Los Angeles Times, some of the punks spilled onto the freeway, allegedly disrupting traffic.

Video footage shows cops as they started shooting ‘less-than-lethal rounds,’ (usually rubber bullets or beanbags) in an attempt to disperse the crowd. One punk fan told reporters “We were just having a good time when the police started shooting but the pit just got more intense. If you ask me, there are probably better ways to break up a crowd than this.”

Despite the chaotic scene, reports say there were no arrests and one cop was slightly hurt.

Scenes from the Punk Gig in LA – before the cops ended it.