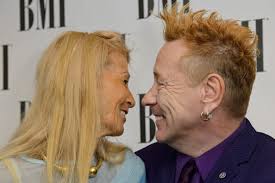 Former Sex Pistol and PiL frontman John Lydon has opened up about his life with wife Nora Forster, who is living with Alzheimer’s disease. The punk rock legend has revealed that he has become Forster’s “full-time carer” saying in an interview published by the UK Newspaper The Mirror  that he “won’t let anyone mess with her head.”

“For me, the real person is still there,” Lydon said of his wife, 78. “That person I love is still there every minute of every day.”

Though Forster’s condition has worsened recently, Lydon said that it’s “amazing” that his wife of 41 years still knows who he is. Alzheimer’s disease is a common type of dementia, that affects parts of the brain that control thought, memory, and language.

“The stress is killing me,” Lydon, told Q104.9. “It’s not just the work, but personal family issues of illnesses that are really, really serious to me.”

In the interview, Lydon also touched on being a stepfather to Forster’s daughter — The Slits singer Ari Up, who died from breast cancer in 2010 — and a guardian to the musician’s three children.

“I’ve always been a caregiver, It’s part of my nature, I just can’t help it.”

No one should face Alzheimer’s alone.