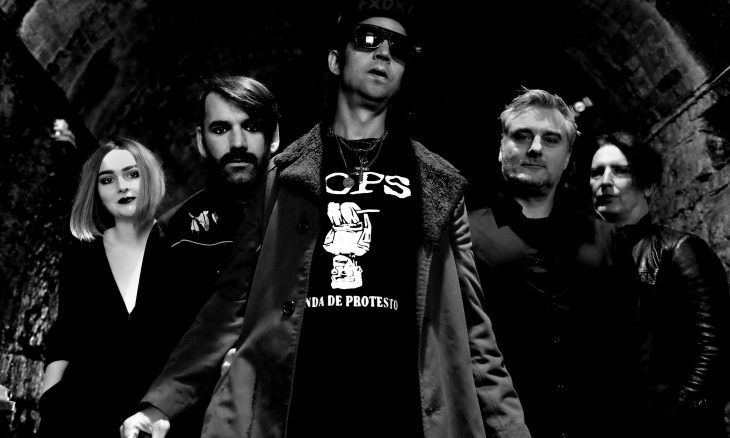 Called a ‘cult legend’ by BBC Radio 6’s Tom Robinson and ‘a towering figure on the UK live scene’ (The Metro), John E Vistic is a singer, multi-instrumentalist and award-winning songwriter.  Vistic’s live set is a fireball of punk rock n roll fury and psychedelic mayhem; his five-piece band sets off a stratospheric wall of sound.

As BBC’s Sam Bonham says, ‘Vistic doesn’t do things by halves…’.  His musical influences include The Jesus and Mary Chain, Marky Ramone, Jesus Lizard, PIL, Bauhaus, The Stooges, The Birthday Party, The Cramps, Sisters of Mercy, The Cosmic Psychos, Rocket from the Crypt and The Beasts of Bourbon, as well as contemporary acts like Idles, Metz and Fontaines DC.

The new album has been described as ‘filthy’ by Damien of Mclusky/St.Pierre Snake Invasion fame and as opening track ‘Sublime Architecture Of Life’ explodes into life and hooks into your skin with its “we’re all in this together” refrain, ‘filthy’ is certainly an apt way to describe the cutting grooves and fuzzed-out attitude on display.

You can get a first taste of the album today in the new single ‘King Of Rock N Roll’ that splutters into life with a Bikini Kill ‘Rebel Girl’ tribal drumbeat; the song is about the emergence of the ‘universal expert’. “Suddenly everyone’s a fucking epidemiologist etc., funnily enough, written two years before covid!” exclaims Vistic.

‘Under The Volcano’ is Inspired by Malcolm Lowry’s island of Gin and Death, Bob Dylan’s Black Diamond Bay (‘seems like there’s always another hard-luck story’) Ezra Pound, TS Eliot, WB years, Shakespeare, and the general sin of Hubris. This album is Part One of a Three album Triptych, including ‘Sense of an Ending’ (Part II) and ‘Oblivion’ (Part III). Thanks be to Rabbe Nachman, God and Nietzsche.