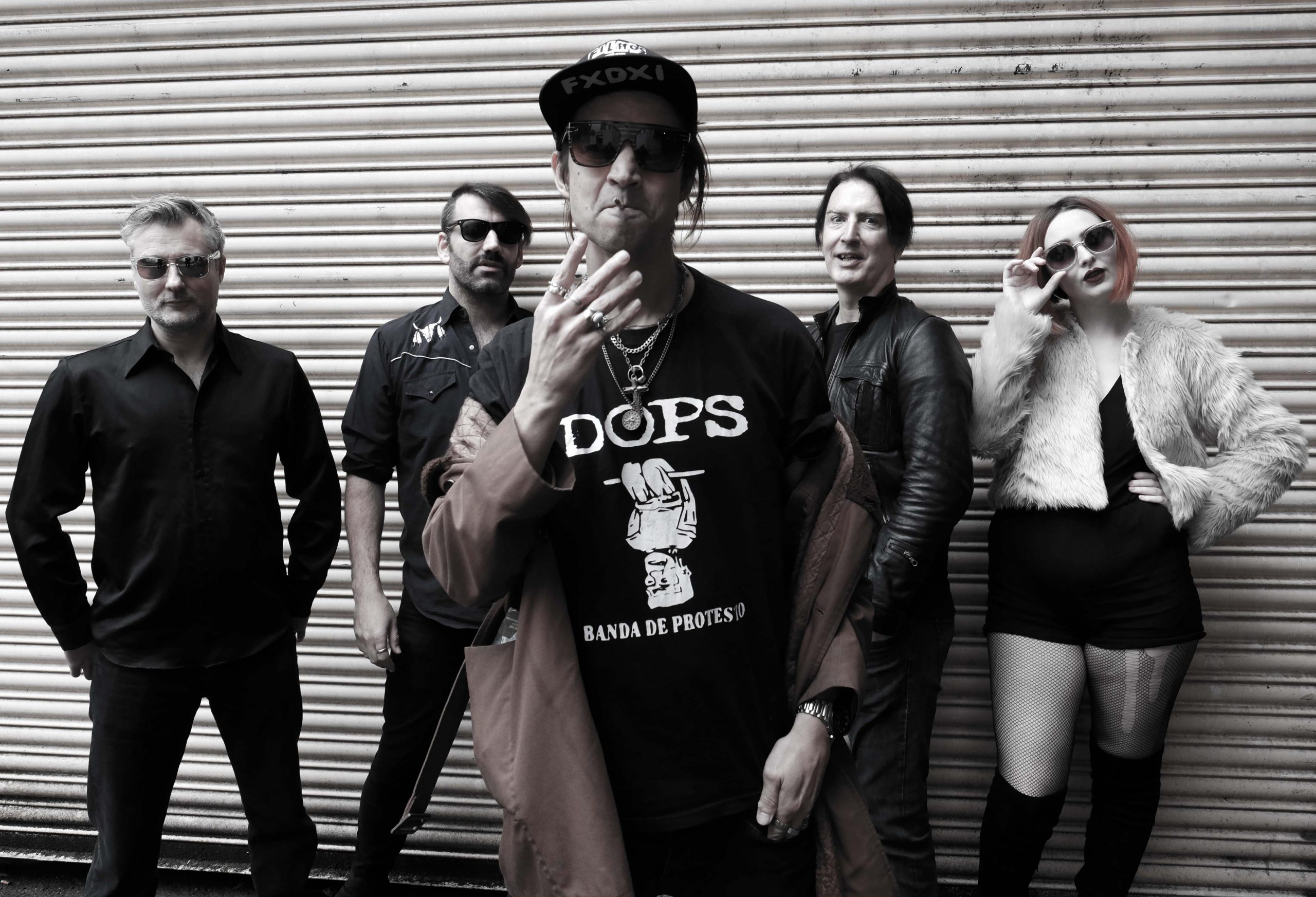 Bristol’s punk rock ‘n’ roll legend, John E. Vistic, chats to Punktuation about his new album, his musical and literary influences and the impact growing up ‘Down Under’ has had on his music.

Like most musicians, these last two years have been an almost surreal time for Australian-born singer, multi-instrumentalist, and award-winning songwriter John E Vistic. He had finished his new album‘Under The Volcano’ and was readying himself to release it when the world came to a grinding halt. Unable to tour the album, Vistic decided to put it on ice and wait for the shitstorm to pass,

However, while live music was on its pandemic-inspired hiatus, rather than battening down the hatches, Vistic simply shifted gear. He founded The Ark Charity Album series Vols.1 and 2 getting together 47 Bristol acts who gave their work to support the Quartet Charity Covid Appeal.

“Yeah, we raised a bunch of money for the charity, which is really cool. It was right at the start of COVID and no one knew what was going on and what would happen in the future. We heard that people were losing their jobs and not being able to feed themselves; it was sad. I kinda felt like I wanna give something, but I didn’t want it to be political, so I decided to do it withThe Ark Charity Albums.”

Ironically, as the global pandemic played out, musicians and those involved in the entertainment industry probably suffered the most financially. An irony that doesn’t escape Vistic.

“I think most people on the album probably would like to have got a bit of money themselves. It’s a bit of a nightmare ’cause obviously, it’s so hard to make money for music as it is, let alone throwing a global pandemic on top of that.”

With vaccine rollouts and lockdown restrictions lifting all over the globe, the music industry is thankfully waking from its enforced slumber. Music festivals have started again, bands are allowed to perform live music to their gig-starved fans and record companies are taking albums out of their cryogenic suspended states and releasing them to a waiting world.

From its first track to almost its last Vistic’s new album ‘Under the Volcano’ (a ref to the infamous novel by English writer Malcolm Lowry) is a raw, visceral and vicious aural attack. It’s punk garage rock, in all its fury, reduced down to its most basic constituent parts.

If you like the rawness of bands like The Cramps and The Stooges, the ‘tortured soul’ darkness of Nick Cave and contemporary acts like Idles, Metz and Fontaines DC, you will love ‘Under the Volcano.’

Lyrically Vistic’s taps into his literary background (he’s also a lecturer at a music college in Bristol and teaches pupils about philosophers like Sartre and Heidegger). Lyrically, Shakespeare, TS Eliot, Yeats come to the fore, Oscar Wilde duals with Malcolm Lowry, and Martin Amis jostles Houllebecq and Harari. Combining punk and high-brow literary genius may seem like odd bedfellows, but on‘Under the Volcano’ it works!

‘Under The Volcano’ is an album in the truest sense of the word. It’s far from being just a bunch of disparate songs bundled together, packaged and called an album. As soon as the needle hits the vinyl, ‘Under The Volcano’ takes you on a journey. From its opening track, Sublime (perfectly named), to Sapiens its Bowie-esque acoustic closing song, this album lures you in.

“Tom’s a great producer,” says Vistic. “I found him because Adam (Devonshire) from the Idles has a side projected called The Plainviews. I heard their album, and I was like, ‘this sounds amazing; who recorded it?’ So I sent a message to Adam, and he gave me Tom Hackwell’s details.

“I messaged Tom and said, ‘I really like we did on that record. Can you make us sound like that?’ Of course, he said ‘no’, but I met him, and he really understood where I was coming from musically. He understood a lot of the references I was making, and he was into the whole vibe. He’s also a musician, so he knows how to get the best out of you. So, yeah, I’m delighted with a lot of what we did together.

The tracks were laid down live and Vistic says this was an essential factor to keep that raw/live feel to the tracks.

“Yeah, recording it live was important, so we just went into the studio and did it. We recorded it pretty quick, did a few overdubs, and I said, ‘you know, it’s finished’. I think when you over-engineer stuff, it loses its energy, its vibe.

The album’s last track was also the last to be recorded. A last-minute addition that rounds the LP off perfectly.

“I just did Sapiens all in one take. We didn’t have much time in the studio, so we just did it as an acoustic song. Tom was like, ‘just try it with the vocal mic and you on guitar and see how it sounds.’ You know, it sounds kind of raw, and I like that.

“We never had a chance to record the full band version, so we kind of left it as this enigmatic acoustic track which I really like as a closer. The track summarises everything the album’s about.”

Growing up in Australia had a profound effect on Vistic’s music, which is evident in ‘Under The Volcano’.

“I like the raw edge of the bands I grew up with in Australia. I think their raw edge comes from living in Australia. There’s a thing called the secret of the Australian desert. It’s like early Mad Max. If you watch the first movie, then you’ll kind of understand the old Australia. It’s hard. The land is rugged; it’s uncompromising and, in a way, murderous.

“‘Under The Volcano’ touches on the fact that people who live in cities don’t understand what it’s like to die – they’re not anticipating death. No one in cities seems to understand what I call the sublime architecture of death. Death is the thing that links us all, above everything.

“In the outback of Australia, you are connected to that imminence of death and have this existential dread of it. It’s an anxiety that I think people living in the cities in England just don’t understand, but it’s right there, just out the window.