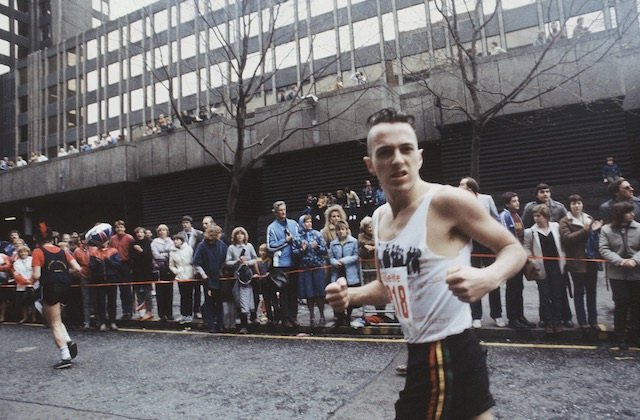 Joe Strummer proved that running really is punk by taking part in a number of marathons over the years and Cardiff-based Running Punks is doing its bit to keep the spirit of Joe’s running shoes alive.

The original ‘Running Punks‘, two old friends and bandmates, Jimmy (a guitarist and ex-world champion runner) and Rhodri (a teacher and rock drummer) decided to take a punk rock approach to their run club because the don’t want to conform. They just want to run for the freedom and escapism it offers but also do it with their own ‘do-it-yourself’ philosophy!

The duo soon realised that there must be more people like them out there – people who didn’t fit into the traditional running club scene, people who lacked confidence or who suffered with demons, people who’d never considered running – musicians, artists, the alternatives among us – the people who would benefit the most from what running offers.

“Music and running are both about self-expression. They are both celebrations and used wisely, they can both lead to self-betterment. In the past, there has been segregation, stereotypes and misconceptions that if you do one, you cannot do the other. We want to change this,” the guys explain.

Jimmy and Rhodri believe that it doesn’t matter what kit you’re wearing, or what kind of diet you’re on – they just want to encourage as many people as possible to put on their shoes and start running so they too can experience the benefits the sport can give!

Running Punks has caught on, so much so that even IDLES drummer, Jon Beavis, joined in on a morning loop around Bristol with them! And Jimmy and Rhodri want you to join their tribe too.

“The Running Punks Run Club is incredible!” says their website. “It’s NOT a place for egos, segment hunters or PB chasers. We at Running Punks are firm believers in running slow/easy and understand the benefits of it, and that’s what the run club is all about.

“It’s inclusive and positive. We support one another and will never leave anyone behind. We just go out there, don’t take ourselves too seriously, play some awesome music on a Bluetooth speaker and have a great time!”

Best of all, if you want to join there are no forms to fill in, there is no initiation or fee to pay. Simply head to one of their social media platforms and start communicating with them! How punk!

Running Punk meet on a Sunday morning at 8:30am “somewhere in Cardiff” (the meeting point is shared on social media each week beforehand) and the run lasts for about an hour. Go on… get your arse moving! Joe would be proud of you!