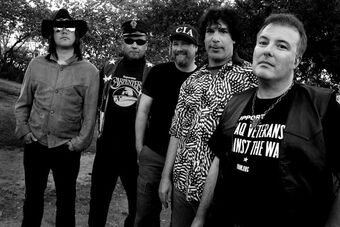 Jello Biafra and his punk supergroup The Guantanamo School of Medicine released their first video for 7 years last week, with a track entitled ‘Taliban USA.’ The song is a swipe at the tyrannical violence and social conservatism embedded in American mainstream culture, as lyrics recalling the bloody purge of the Salem witch trials is sung over images of radical right-wing Republican politicians such as Mitch McConnell, Mike Pence and Sarah Palin.

No one can accuse the former Dead Kennedy’s frontman of losing his radical political edge as the montage of images in the video cover everything from guns, religion, reproductive rights, and America’s aggressive foreign policy.