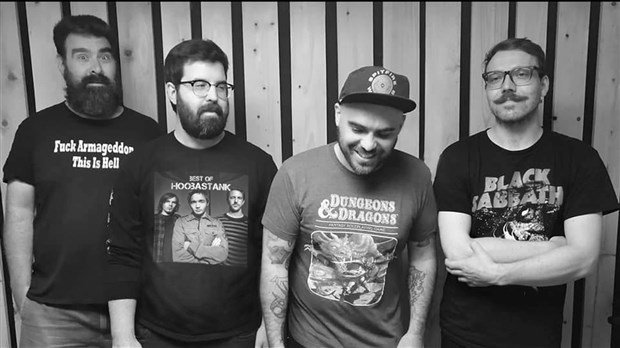 TheQuébec-based pop-punk band drop the single ‘Denis Le Vampire’ a song about a blood-drinking student who doesn’t have a career plan!

Founded a little less than two years ago between a basement in Cacouna and a garage in Notre-Dame-du-Portage, Québec, Canada the band PasMort has released ‘Denis Le Vampire’, the first track off their soon to be released album ‘Pas Responsable Des Accidents’ (Not Responsible For Accidents).

“We are all musicians who went into exile to play in punk bands in Quebec or Montreal,”explains bass player Louis-Alexandre Boulianne. “We all toured in different bands but over the years life got in the way and I guess music became less present in our lives.”

However, it wasn’t until  Jonathan St-Pierre (vocals and guitar), Louis-Alexandre Boulianne (vocals and bass), Francis Bernard (drums) and Olivier Thériault (guitar) got together that the guys found their pop-punk mojo again and during lockdown they formed Pasmort and wrote an album…as you do!

The first single ‘Denis Le Vampire’ is a song about a vampire who has no career plan and is worrying about the course choices he must make for collage.

“It’s not because you can change into a bat

That you know what you want to do in life

That you can’t disappoint your parents.”

All the songs were recorded at the Sonar X Rainbow Submarine studio by engineer/producers Bastien Banville and Mathieu Bossé.

“We wanted to work with people we respect, ” Boulianne reveals. “That was super important for us, it was the only choice to make.”

PasMort will be announcing dates for shows across the province to support the spring release of their album soon!

Need MorePasmort In Your Life?