It Ain’t No Joke – Jaz Coleman is made a Doctor! 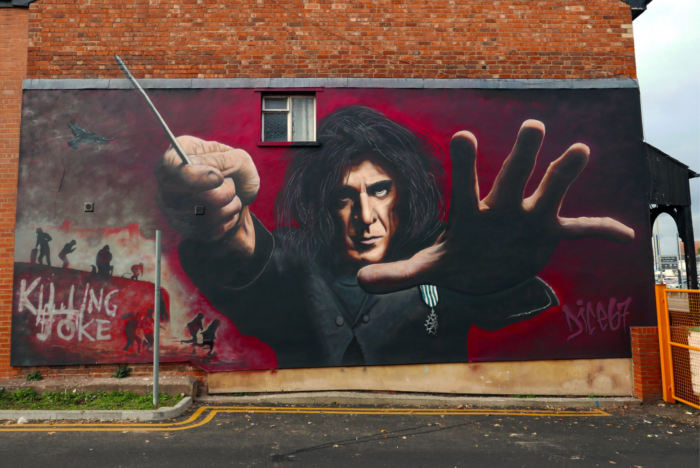 Killing Joke’s Jaz Coleman receivesHonorary Doctorate and a 20ft high mural is painted in his honour.

The Cotswolds area in the UK has produced a number of famous musicians, actors and artists, but Jaz Coleman, or as he is now known, Doctor Jaz Coleman. is arguably the most groundbreaking of them all.

On Wednesday 24th November, Coleman’s contribution to both contemporary and classical music was recognised by the University of Gloucestershire by awarding him an Honorary Doctorate of Music.

Stephen Marston, Vice-Chancellor of the University of Gloucestershire, said: “As a university, we were proud to honour Jaz’s achievements by awarding him an Honorary Doctorate of Music at our recent Graduation Ceremonies in recognition of his significant contribution to the arts and, in particular, his contributions to both contemporary and classical music.

“His career and achievements resonate with many of our students, particularly those aiming for careers in, music, creative arts, and performance.”

To mark this special occasion, local commercial mural artist, Andy Dice Davies, (Director of Dice 67) was commissioned to paint Jaz’s portrait on an existing site in Cheltenham. The 20-foot-high portrait can be viewed at the High Street Car park, Swindon Road entrance.

“It’s been such an honour to have painted Jaz. Seeing Killing Joke on the Tube in 1985 changed my musical taste and I’ve been a fan ever since. I first saw them later that year at The Elephant Fayre in Cornwall and his performance blew me away!”

Returning to the town of his birth, fresh from recording new Killing Joke material in Prague, gowned up and ready to accept his award, Dr Coleman said;

“Cheltenham gave me everything. I learned all my music at St Mary’s Church Charlton Kings, The North Gloucestershire Youth Orchestra and Cheltenham Young Peoples Orchestra. It has been a long journey, and I am deeply touched by the recognition by my home town. And as for the mural, I’m blown away. I’m absolutely blown the fuck away.”

Killing Joke are set to play their first UK tour in over three years, 2022’s Honour The Fire tour.
Killing Joke’s ten-date tour will start at the Tramshed in Cardiff on Monday, 28th  March, before concluding in London at Eventim Apollo Hammersmith on Saturday 9th April.

The full list of ‘Honour The Fire’ UK 2022 shows are below. The Imbeciles are supporting on all dates and Brix Smith is the special guest in London.