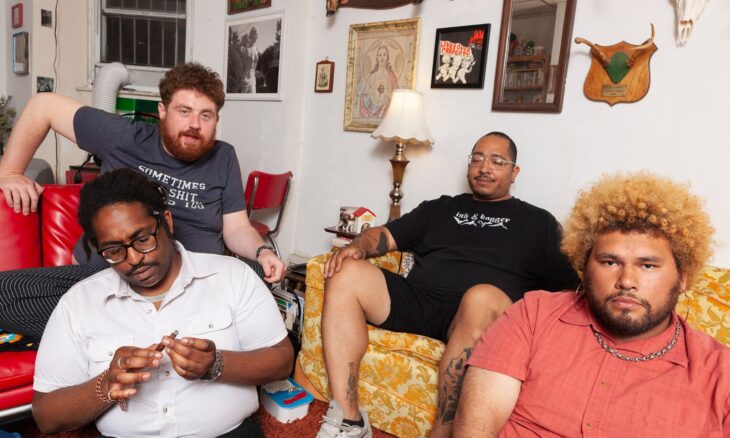 The Philadelphia punks first single off their soon to be released LP makes fun of people who have asked their drummer, “what’s it’s like being the only white member of the band.”

Revolutionary Philadelphia hardcore punks Soul Glo’s forthcoming album ‘Diaspora Problems’ will be unleashed on a waiting world on March 25th via Epitaph Records, and to keep fans entertained until then, the band has released the single, ‘Jump!! (Or Get Jumped!!!)((by the future))’.

Of the video, vocalist Pierce Jordan says, “Essentially, the video makes fun of the people who have asked our drummer what it’s like being the only white member of the band, playing upon the presumption that we aren’t actually friends and have TJ in the band just to be able to bully them.

“A lot of the gags in the video largely references the movie Whiplash with J.K. Simmons and Miles Teller, which is about a young drummer and his abusive mentor. Toward the end of the video, we throw a Roots reference in there to further explore the idea of “reverse racism” which really is only ever just a persecution fantasy that exists in the minds of white people.”

“We throw a Roots reference in there to further explore the idea of “reverse racism” which really is only ever just a persecution fantasy that exists in the minds of white people.” Pierce Jordan, Soul Glo on single ‘Jump!! (Or Get Jumped!!!)((by the future))’

The track is a hardcore whirlwind of justified rage, spinning like a verbal circle pit with a steady drumbeat and swirling guitars. It’s a ferocious, full-on hardcore punk attack that blends hip-hop, hardcore, and punk channelling the flow of Migos and Three 6 Mafia mixed with the hardcore crust of Warthog, Converge‘s You Fail Me-era, and screamo cacophony akin to City of Caterpillar.

The soon to be released Album, Diaspora Problems, is only the beginning of what will undoubtedly be a bright future for Soul Glo, as well as a forecast for what the band is capable of musically.

Diaspora Problems is due out March 25th via Epitaph Records.