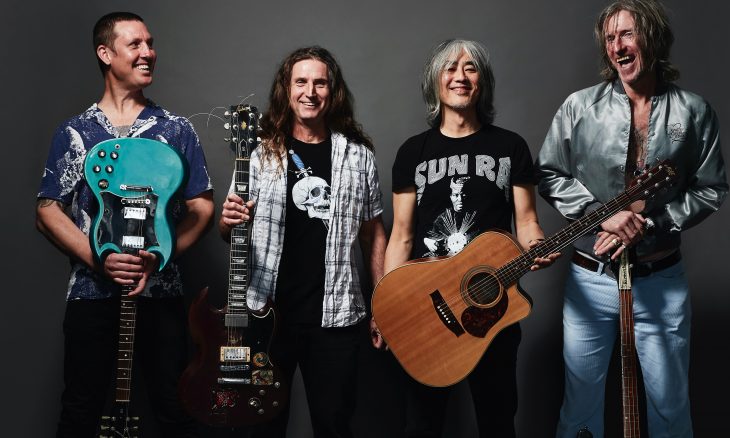 The Australian punk legends have a new frontman, a new album and a fresh new dynamic sound. Punktuation’s Tracey Moyle however, is pleased to discover the Hard-Ons haven’t lost any of their fun-loving Aussie punk attitude.

Way back in 1981 Aussie punk pioneers, the Hard-Ons stormed onto the punk scene Down Under with their almost tongue in cheek ‘don’t give a fuck’ attitude.

For four decades now, they have been a revered staple on the Aussie scene. They’ve never stopped inspiring, performing, releasing albums, and powering on through line-up changes that 40 years in the industry is bound to bring.

The most recent lineup change was back in March when founding member and lead singer Keish De Silva was ‘let go’ from the band after accusations of sexual misconduct arose. A proposed documentary about the band was also cancelled.

In a statement released at the time, the band said: “If something did happen – and we just can’t know – we really feel for the woman and what she must be going through. Ray and Blackie are respectfully asking everyone to let due process take its course. The Hard-Ons will keep on playing, just not with Keish.”

When the band duly announced that Australian rock royalty and You Am I frontman Tim Rogers was to replace de Silva, Hard-Ons fans were stopped in their tracks with many thinking (mostly out loud), ‘what the fuck!?’

Fans were wondering if Rogers would gel with the band’s distinctive personality. Would he fit the member profile that has made the Hard-Ons the punk legends they are today?

Despite some of their fan’s doubts, the band considered Rogers joining the band to be the most natural progression you could have had with the Hard-Ons’ line-up.

So how did recruiting Tim Rogers come about?

Even Rogers himself thought it was a joke at first. His colourful recollection of the events sparked the banter. between Rogers and Blackie .

“It was a bit of a détente,” said Rogers. “It was like being at Camp David in the ’80s with Jimmy Carter and Breshnev. I was walking with my friend Mick (Sayers); he and I are in the band Draught Dodgers. We were just walking around St. Kilda being idiots, and Ray Ahn (The Hard-On bass player) called.

“I hadn’t spoken to Ray in maybe a year, and he said, ‘would you ever considered singing with us?’ I thought it was all a stitch-up. But I know I went home and did a couple of cartwheels, and some star jumps”.

The banter rolled on with Blackie jumping in, “Some jump squats with your core on?”

“ Yep, jump squats and those bloody crawling things; what are they?”Rogers fires back. “Those things everyone fucking hates? Burpees!”

Being more serious, Blackie added, “Yeah, it was a simple telephone call, you know. We were sitting around in the rehearsal room already bashing out some of these songs trying them out -that sort of shit, and Ray’s like, ‘man, you know who we should ask to sing?’ And he goes, ‘I’m going to ask Tim Rogers to sing’. Me and Murray (Ruse) looked at each other and said, ‘that would be fucking mental’.

“It’s funny how some people couldn’t see it. For us, it was like, how could it not work having Tim in the band?” Blackie concluded matter of factly.

Rogers history with the Hard-Ons stretches back to his younger days, way before he tasted success with You Am I.

“I wanted to get the sneakers that Ray had. I want to get an SG guitar because Blackie played an SG. It’s kind of nuts how it all ended up.”

Rogers was so excited about being asked to join the band to try out with some of the new Hard-Ons songs he opted to drive to Sydney so he could take the time driving to process everything.

“I said to someone that I regarded my working for the Hard-On as a bit ‘job-like.’ But I think I only regarded it as such because that was the only way I could not be overwhelmed,” Rogers admitted.

Despite a 30 year friendship, Rogers said it was still intimidating becoming the newest member in a well-established band. As Rogers put it, “Even if you know somebody as a mate, bands just have their own thing going on, and you’ve got to figure all of that out. But thankfully, there’s a strange synergy with the way the ‘Dons’ get on and the way You Am I do. Because we really just wanna do something that’s important and fun, you know.”

For over four decades, Hard-Ons music became not only a staple but a foundation for the Australian punk scene. Unlike so many of their peers from that era, the band never stopped. They continued recording and touring despite line-up changes and life rolling on as it does.

With the first Tim Rogers fronted singles Hold Tight and its follow up Lite As A Feather fans were treated to a glimpse of what they can expect from the band’s latest album, ‘Sorry Sir, That Riffs Been Taken‘, which is due to drop this Friday.

This album is a whole new morsel for fans; like trying out your favourite dish with a new ‘tasty’ addition.

With 40 years under their belts, a natural evolution in sound was a sure thing. Add to that a new frontman, himself with over 30 years to establish his own sound and temperament you’re bound to have fans from both sides intrigued with the outcome. Don’t worry, the result is simply dynamic.

The band have harnessed the energy fans expect and directed it in a way that has not been done by the band before. Punktuation’s review of the upcoming album release recently described that “they balance this high energy with an atmospheric ambience”.

So, what is the story behind the album name?

“There isn’t one. It’s just something funny”, Blackie admitted. “Yes, just popped out of my arse, that did.”

“I saw it happen; it was quite something.” Rogers laughed.

“I let you see it,” Blackie chuckled.

Rogers quickly retorted. “It was the brownest title of all time.”

How did the band feel when the new Hard-Ons album was finally in the bag?

“We were beyond stoked with it,” Blackie admitted. “Trust me, very, very proud of it.”

Rogers has definitely woven his own essence throughout the tracks, but it’s very much a Hard-ons album.

“I know this is going to sound like one of those ‘hindsight after the fact’ comments, but pretty much from the first song, you could tell something was happening. I know us three (Black, Ahn and Ruse) secretly looked at each other and were kinda like ‘What the fuck? How good is this?’

“Straight after the recording, Ray rang me and went -‘Whose idea was this, huh? Is this one of my best ideas, or what?’ But it was. It seriously was. You could tell from the word go that this was something.”

Was stepping into the shoes of one of his idols difficult for Rogers?

“The thing is, you know, I’m possibly the most pretentious person in the world, and I’ve always considered the Dons to be the least pretentious band in the world. But I couldn’t go in and be anyone else apart from myself,” was Rogers honest response.

“So again, with that ‘job’ analogy, I thought, well, if these guys have asked me, I’ve got to have something. So, I’m just going to be myself.”

When the frontman of any band changes, the dynamics of a band will change. Was there a new dynamic with Tim on vocals?

“Definitely,” revealed Blackie. “Vocal-wise, Tim leaves Keish and me for dead. He could take some of those melodies and really take them to the limit. It’s too hard to explain for me, but yeah, his input was massive.”

Rogers added, “I know Pete’s really self-conscious about his voice, but I fucking love it because it just shows that that’s the man. That’s a human right. Whether hearing him acoustic or singing with the ‘Dons, whatever arrangement, it’s just all human there, beautiful human.”

Of the two singles released so far; the latest ‘Lite As A Feather’ is a favourite of Rogers.

“Light as a Feather was originally called ‘Shit Sandwich,’ and it’s my favourite song of all fucking time,” Rogers said passionately. “When Pete sent through the lyrics, I was in tears. This is a beautiful story so well told. I loved the sound of it so much and I absolutely fell apart. When we finally got to record it, I put everything I had into that song. It’s just a thing of rare beauty and excitement.”

You can hear ‘I’m Sorry Sir, That Riff’s Been Taken’ in its entirety this Friday 8th October when Hard-Ons release it in all its ‘morning glory’. Pre-Order your digital copy and buy your vinyl or CD copy here.

The band are supporting the album release with a nationwide Australian tour that kicks off on the Gold Coast, Australia, in March 2022, taking the band down the east coast and finishing up in Melbourne in April. Full details are below!

#BillyIdol, Taylor Hawkins and a cast of a thousand to play the #SexPistol’s Never Mind The Bollocks and Lous Reed’s Transformer back to back at charity benefit event ‘Above Ground’ in aid of @MusiCares

Billy Idol, Taylor Hawkins and a cast of a thousand to play The Sex Pistol's Never Mind The Bollocks and Lous ...

“I never liked #TheClash. They sounded like old music, dressed up as punk. The #Ramones were geniuses.” Lemmy.