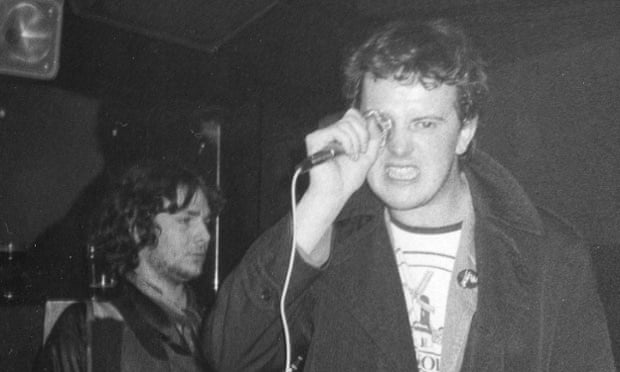 In 1977, punk fan and Manchester postman, Jonathan Ormrod invaded the Buzzcocks’ stage grabbed a guitar and started to play…from that moment on his iconic punk status was sealed!

John The Postman (Jonathan Ormrod) was, hardly surprisingly, a postman. Jon (Jon added an “h” to his name on his albums) and his friends were regulars at the first punk gigs in Manchester. It was at one such gig in April 1977 after a few too many drinks that Jon decided to invade the Buzzcocks stage, picked up a guitar and decided to terrorise the audience with his version of the rock standard Louie, Louie.

Far from being murdered, he actually won a few admirers and after a couple more appearances was actually invited to become the official support to such artists as V2, The Fall, John Cooper-Clarke and The Drones.

Soon Jon was joined by other musicians and a band (of sorts) was formed for the live gigs. Things improved, sometimes they got paid for appearing!

Flushed with success and beer money, it was inevitable that Jon would sell out and release a record on Manchester’s Bent Records. So in Feb 1978 Jon and fifteen other musicians got drunk and headed into Pennine Studios in Oldham to record their debut mini album Pueri The introduction to the album was by Mark E. Smith of The Fall and was his debut appearance on vinyl.

The album was released in a brown paper bag (to look like a letter) and sold an impressive 10,000 copies.

In need of more beer money, Jon and ten musicians went to Cargo Studios in Rochdale on Sunday, 10th October 1978 and in a few hours completed his second album. Packaged in another appropriately D.I.Y. sleeve the album was another success, selling 7,000. Sounds saw fit to describe Jon as “neo-legendary and neo-obscure”.

A third album was recorded in 1980 scheduled to appear on Mark E. Smith’s Cog Sinister label, before departing to America to work as (you’ve guessed it) – a postman – and in the spirit of punk Jon faded into oblivion.

In 2014 Jon approached Overground Records (who had reissued his other albums) and a release was planned. Sadly Jon who prophetically suggested the title died in 2015 and the project was shelved… until now.

This masterpiece of mayhem continues the madness and is released as a limited edition of just 300 copies. It is a perfect tribute to a Mancunian icon.