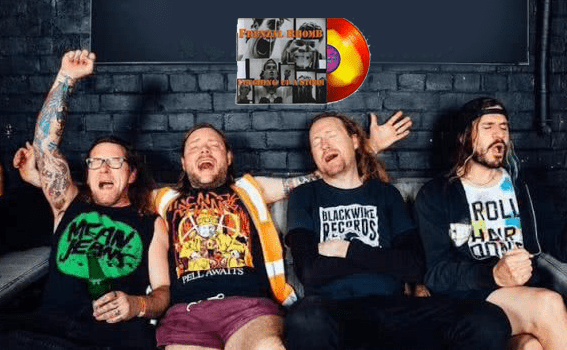 If you think of Australian punk rock, you will not be able to avoid the name Frenzal Rhomb. They formed in 1993 in Sydney and after touring Australia with bands like The Offspring, Bad Religion, and Blink-182 they headed into the studio and recorded their debut album Coughing Up A Storm.

The LP was released in March 1995 on Shock Record label’s sub-label Shagpile Records. Later in the year after supporting NOFX the band was signed by Fat Mike‘s Fat Wreck Chords.

Hyped by Fat Mike Frenzal Rhomb quickly became one of the biggest independent Australian punk bands and they embarked on a world tour taking in countries like The States, The UK, Japan, South Africa and Israel.

Best known for his artwork for tour posters for Bad Religion and NOFX Stefan just loves to repress favourite albums from his youth.

The skatepunk fan and artist teamed up with the pressing plant responsible for Europe’s Fat Wreck Chord’s vinyl to achieve these great looking records.

Not only does Frenzal Rhomb’s ‘Coughing Up a Storm sound as good as it did 26 years ago it now looks better than ever! One for the collectors that’s for sure!

The legendary “Coughing Up A Storm” will be released on March 3.