Exclusive: Be the first to watch Riskee and the Ridicule’s new video ‘Backwords 2’ – Live Now! 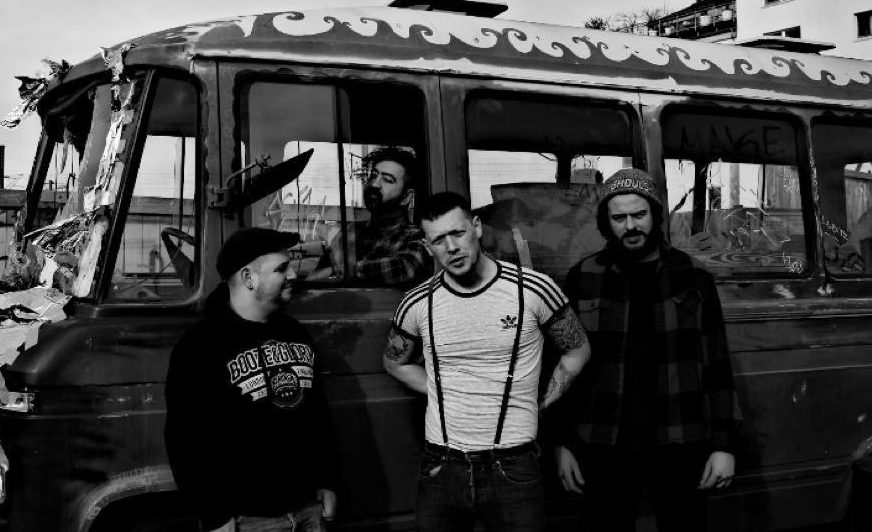 Yes, you heard that right. Riskee and the Ridicule played a gig. In 2020, when no one else could – or would – yet somehow, in those brief moments of respite between lockdowns and revolving tried systems, the Kent punks managed to take to a stage and unleashed many months’ worth of pent-up frustration and rage – and it felt so fucking good.

Despite the small ‘socially distanced crowd, sat apart at tables unable to stand up or move, nothing could suppress or hide their complete joy at hearing the music again. And then it was over, everything went quiet, and we scuttled back to our silent, locked down isolation.

“We’re not doing any more socially distanced gigs,” Scott tells Punktuation! “We’re not the sort of band that can play them. Our songs have got too much energy. Our music needs a mosh pit, stage-diving and crowd-surfing. We’ve got some gigs lined up and they’re not socially distanced at the moment. But if that changes, we’ll reschedule.”

Of course, it should not have been this way. In 2019, the band released their new album – the spectacular ‘Body Bag Your Scene’ – through Bomber Music. It went down a storm. They played explosive sets at Rebellion and Boomtown festivals and were looking forward to the months ahead of taking the album’s energy across the world, and well, you know what happened next… our world ended.

Thankfully, just before the pandemic came down like a hammer, Riskee and the Ridicule recorded three brand new songs and put out the first two throughout 2020, starting with the Brexit-baiting ‘Blue Jacket’, followed by their majestic cover of Lana Del Rey’s award-winning 2013 smash-hit, ‘Young and Beautiful’.

Now, the third of these three songs is ready to be set free upon the world. Titled ‘Backwords 2’, loosely linked to the song ‘Backwords’ that featured on their 2017 album ‘Blame Culture’.

“It’s a song about the influence of the media on the general public, how they can be so easily swayed by spun truths and false words,” says Scott.

“The close-minded approach to the world we live in has to be torn up. It’s less like a sequel to Backwords and more like a progression. We’re a different band who have got better at what we do, this felt like a way to showcase that with different dynamics and new wordplay.

“Get out of it what you want. It’s a song for all the people. It’s there to be heard.”

Scott writes the lyrics to the songs and the rest of the band add the music. It’s a formula they’ve always used. And why not? It works. The lyrics on Backwords 2 are clever wordplay

Watch the Backwords 2 video below (filmed on an iPhone) and you’ll see what we mean. (Hint: The clue is in the title – Backwords).

The track starts with a brief scratched-guitar harmonic before the band pile in full of passion and conviction as they channel all of the angst and frustration expressed in Scott’s lyric. The song’s addictive hook-filled melodic chorus soon gets you wishing you were front row at one of their gigs singing the lyrics back at the band before the track drop into an almost dream-like middle eight. You’re not given long to catch your breath before the band wake you up with the anthemic chorus outro. Before you know it you’re left all hot and sweaty screaming for an encore!

CHECK OUT THE VIDEO EXCLUSIVELY HERE:

The boys – Scott, Matt Verrell (drums), Maz or Joe on bass, Jordan Mann on lead guitar, and Jimbo on rhythm guitar and vocals- are about to jump on the road and head out of their home town of Ashford in the south of England and get gigging again.

“I can’t wait to get out and get back in the van with the rest of the band,” says Scott. “We’re best mates and we love playing music. It’s why we got together. Just writing, playing gigs, releasing music, touring the world and meeting cool people – doing all the things most normal people wouldn’t get to do is my measure of success.

“People say ‘I hope you guys really make it’, but to be honest, doing what we do – what we love -we feel we’ve already made it. We’ve got a small, but loyal and appreciative fanbase, our merch always sells out and they seem to love our stuff. Anything more will just be a bonus.”

Listen On All Streaming Platforms Here

Catch the band live at the following dates in 2021.

More Riskee and the Ridicule