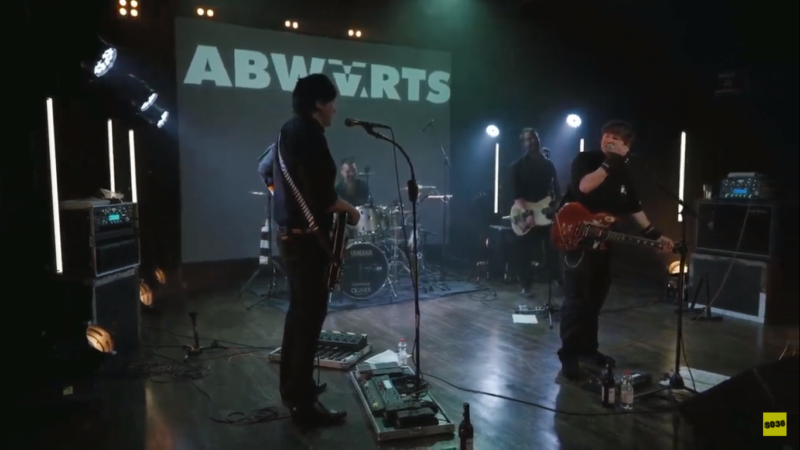 The legendary Hamburg post-punk band Abwärts (meaning “downwards”) played a show at Berlin’s SO36 that was live-streamed on Facebook and YouTube starting 9 PM CET yesterday evening.

This online event was free of charge, however, it was also possible to buy tickets to support the artists as well as the Berlin cult punk venue. The SO36 wrote on their social media that live-streaming is not really their cup of tea but willingly decided “to make this one exception, hoping this will be both their first and last stream”.

The online event lasted for about one hour and fifteen minutes and Abwärts played a mixture of their old and new songs Affentanz, Alkohol, Millionen Killer, Going Down, Grab dich selber ein, Zonen-Zombie, Terror Beat among others.

The band’s original founding member, singer and guitarist Frank Z announced the last song Computer Staat by saying, “back then who would think that it is exactly the computers that would enable us to perform a live show like this today”.

The 1980 hit song Computer Staat (computer state) whose lyrics somewhat resemble the times we live in: “Germany disaster state, we live in the computer state!”.

Speaking of the times we live in, Berlin’s electro punks Egotronic recently dropped a new single Nadel verpflichtend (“needle mandatory”) as part of their newest album Stresz to be released on July 23rd on Audiolith Records. This short and catchy song is all about the current pandemic state of the matter.

The lyrics are clear: “When will it finally start again? We finally want shows again”, “Hey punk, stay healthy”, “Citizens stop eyeballing, sleeves up and get a jab”. Egotronic clearly wants to raise awareness about the importance of getting the vaccine in times of rising frustrations and the ongoing absence of what used to be a normal life full of gigs, festivals and hangouts at our favourite bars and venues.

In addition to the new single, you can also play a brilliantly funny “needle-mandatory” video game on the band’s website. The game consists of dropping shots of Covid-vaccine onto people from aeroplanes.

Last but not least, there is some good news – the Bavarian crossover punk-metal band Die Dorks also dropped a new album Die Maschine Von Morgen. Bars and restaurants across Germany might reopen at least outdoors beginning end of May, and if reports by Destiny Tourbooking are right Fat Mike’s Punk In Drublic annual European bash might finally happen end of August!