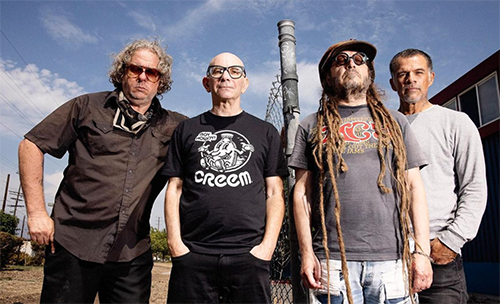 Circle Jerks have announced US and European tour plans that will see the ’80s hardcore legends hit the road with a newly-recruited drummer.

Introducing him via an Instagram post, Circle Jerks said: “He’s making us sound like a well-oiled machine and we’re excited to bring this line-up to a city near you.”

Those plans begin with a 35-date North American tour that starts 5 September in Pioneertown, California with support variously coming from Municipal Waste, Adolescents and Negative Approach.

Those shows will encompass Riot Fest and Punk Rock Bowling, and Circle Jerks promise more 2022 dates will be announced in a few months – ahead of that the band has booked a trio of Halloween Weekend shows in New Mexico and Arizona.

The band have also announced a 2022 European tour that will travel from Portugal to Finland, with stops along the way in Spain, France, the UK (including at Rebellion Festival), Belgium, the Netherlands, Germany, Slovenia and Italy.

Meanwhile, Circle Jerks’ Group Sex has recently been reissued by Trust Records – launched in October 2020 as a home for classic punk and hardcore records – in a 40th Anniversary deluxe edition, with their debut’s follow-up Wild in the Streets due to follow next.

If you enjoyed this you’ll love………

I’m a punk rock aficionado, martial arts pupil and fair-to-middling student of the Bengali language. I’m also a journalist, writer and editor, specialising in medicine and technology. Click on Dom's photo for more of his articles
Advertisement