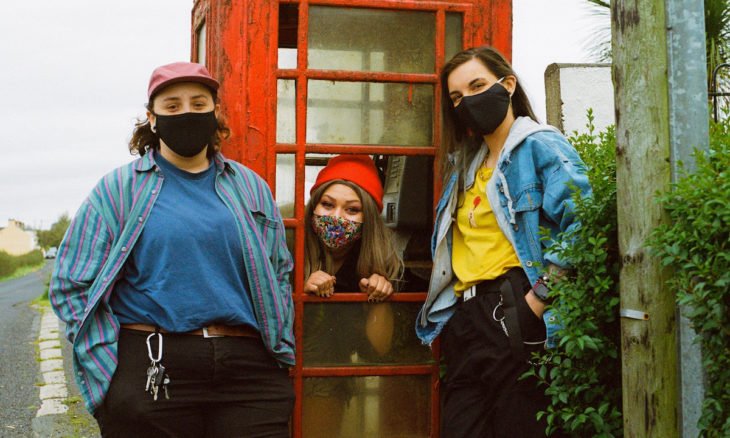 Derry pop-punkers Cherym have dropped their fun new video for the latest single, Kisses On My Cards, out now on Alcopop! Records.

The young Northernern Irish trio have commented on the video, saying, “We’re sort of known for chaotic music videos, but what would you do if your boyfriend was cheating on you? What do you do if you find out he’s three-timing you with TWO OF YOUR BAND MATES???? And what if your boyfriend is actually a 6ft teddy bear???? Safe to say he got what was coming to him in the end.”

Kisses On My Cards has picked up a rising wave of support from Jack Saunders and Gemma Bradley at BBC R1, Tom Robinson at BBC 6music, John Kennedy at Radio X, Dan Hegarty at RTÉ 2fm, and a host of press from DORK, HARDBEAT, VISIONS, Hot Press, Nialler9, The Irish News, The Daily Mirror NI, The Thin Air and many more.

Serving up a zany, fun and fearless new recipe for pop-punk rock, Cherym come with some seriously infectious songwriting credentials.

Taking influence from The Smashing Pumpkins, Bikini Kill, American Football, PUP and Pixies, the trio formed after meeting in college over a joint love of garage rock, pop-punk and a desire to be the biggest band in the world.

Starting out as a kick-back against the local music scene boys club, their relentless enthusiasm and boundless energy are the perfect antidotes to the drudgery of life under lockdown—a very, very bright shining light for 2021 at the end of what’s been a long tunnel.

The band will be revealing more new music over the coming months.

Kisses On My Cards is out now on Alcopop! Records

For more great stories check these out