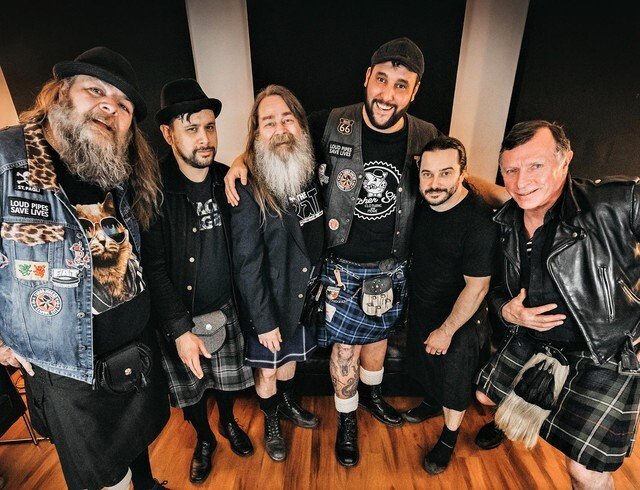 Dust off your kilts, grab an ale and get ready to dance a jig to rowdy sing-a-long punk rock, backed by highland bagpipes

Larger than life miscreants The Real McKenzies have announced that they will be releasing a greatest hits album. It is called ‘Float Me Boat‘ and features 23 of their songs. It will be out March 18 via Fat Wreck Chords. They have also released the single “Chip” with a statement from vocalist Paul McKenzie.

“Charles Dickenson wrote a story, and you should read it. It’s called The Devil and Mr. Chips. It’s a story about a shipbuilder guy, and one day the devil appeared before him with a bucket of nails and copper (as a shipbuilder, that stuff’s really valuable). Satan wanted his soul in return, but he’d have to take this wee rat with him along with the nails and copper. And that rat was a right little fucker and drove the man mad. It’s a really good read.”

Founded in 1992 by the larger than life Scottish punk-rock poet laureate, Mr Paul McKenzie, this merry band of musicians has spent a quarter-century circumnavigating the globe to bring McKenzies gospel to an ever-expanding throng of rebels, scallywags and ne’er do wells.

Not many bands can boast of a nearly 30-year career as staggeringly adventurous, wildly tempestuous and utterly death-defying as The Real McKenzies.

It would be a grave mistake to write them off as just another Celtic punk band (they’ve been around longer than the Dropkick Murphys, after all). They are an unstoppable juggernaut of touring mayhem. A ferocious troupe of insanely talented minstrels, storytellers and entertainers melding traditional acoustic and electric instruments to create a sound like no other.

Their list of accolades is long. From sharing the stage with the likes of NOFX, Rancid, Flogging Molly, Metallica and Shane McGowan to appearing in film, books and video games to signing with the legendary Fat Wreck Chords, their legend only continues to grow.

After releasing the acclaimed ‘Beer & Loathing‘ in 2020 and the many tour postponements that followed, The Real McKenzies will be touring Canada beginning in Vancouver on March 4 with Real Sickies. Check their socials for more dates.