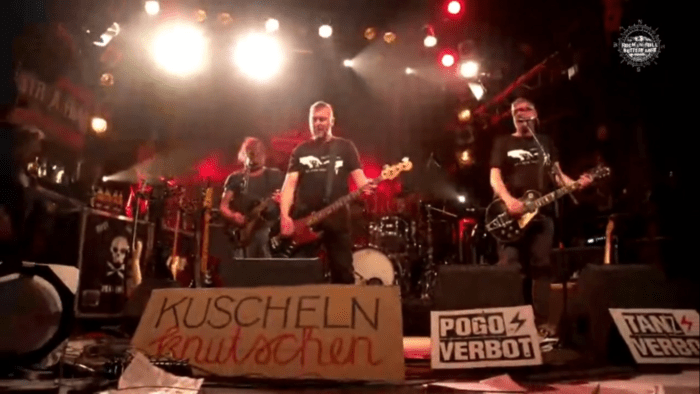 Due to the ongoing Covid lockdown, Germany’s traditional May Day Rock ’n’ Roll Butterfahrt Punk Festival was live-streamed this year, with guest appearances by the UK’s Dirt Box Disco and Ramonas.

“The smallest streaming festival in the world” as the organisers called it, was also full of pleasant surprises. It included videos and appearances by Jürgen Engler from legendary band Male, messages and songs from Betontod and 100KiloHerz, and guest performances by the UK’s Dirt Box Disco and Ramonas.

There was also a video call and a live performance by Zona84 all the way from Argentina and Sondaschule, the ska-punk band from Oberhausen, also used the occasion to introduce their latest video release of the song Bier für lange (beer for long) to their fans.

The comment section, open to all the participants, did not lack fun either. People were writing that “someone should throw the beer on the stage”, “my sofa is burning” and the usual “I am drunk at home alone”, “miss live show!”.

With their energetic sound, charismatic appearance and lyrics highly critical of the German society and politics, Dritte Wahl ended the musical part of the program with the lead singer Gunnar thanking everyone for being there and “we miss you and can’t wait to see you all again!”.

The free-of-charge Livestream started in the afternoon and went on till shortly after midnight. Whoever wanted to contribute could do so by buying a hard ticket copy, a t-shirt, pay for a drink, or make a donation to support the crew.

The organisers raised 7,618.00 EUR and thanked everybody who participated for “proving that it is important that the Knust venue and Rock ‘n’ Roll Butterfahrt remain a platform to your favourite bands once the pandemic is over”.

…AND WHAT ABOUT BERLIN?

On a typical Berlin May Day, one would normally stroll around the district of Kreuzberg to experience a combination of all kinds of leftist and antifascist protests, combined with performances and punk shows, traditionally held at the Hold Your Ground Coretex Records stage at Oranienstraße.

Due to the well-known pandemic reasons and the ongoing lockdown, this year’s May Day in Germany was marked with a series of both peaceful and violent demonstrations, with live music still out of the question.

In such unusual circumstances, to any music lover out there, attending a virtual punk festival from the comfort of one’s couch seemed like a good way to support the scene and a solid and safer alternative to street protests under obligatory masks.

One way or another, this year’s May Day in Germany was both more emotional and frustrating than usual.