Bottoms up! Ten of the Greatest Punk, Drinking Songs… Ever! 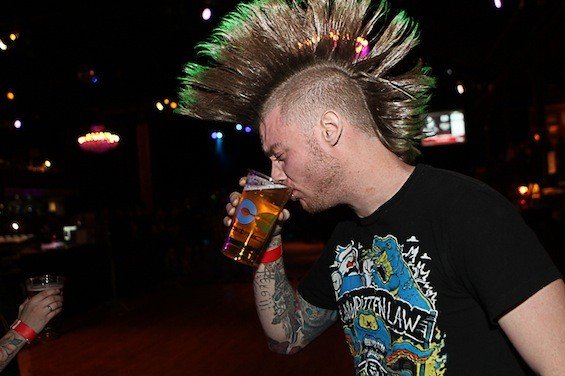 Raise your glass and skol your pint, as we reveal 10 of the best punk songs about boozing – responsibly of course!

Punks aren’t the first musicians to extol the virtues of letting your hair down, having a few drinks and getting loose! Throughout history many musicians, from Frank Sinatra to AC/DC, have ‘got their drink on’ in song. Here, we’ve picked some of our favourite punk drinking ‘toons’ of all time. If you’re looking for a ditty to sup a beer to, one of these booze-soaked melodies might do the trick…

Bottled Violence from this Hardcore Punk band from Washington D.C. is about drinking too much, being a dickhead and having a punch up!

“Lose control of your body
Beat the shit out of somebody
Half-shut eyes don’t see what you hit
You don’t take any shit
Go out and fight, fight”

9: Who Spilt My Beer – The Addicts

Who Spilt My Beer is a track taken from The Addicts Bar Room Bop EP that was later added as a bonus track to the ’93 re-release of their 1981 debut album, Songs of Praise.

8: Banned From The Pubs – Peter and the Test Tube Babies

In 1978 two 17 year old punks, Peter Bywaters and Del Strangefish, formed Peter and The Test Tube Babies After two rehearsals they made their first recording Elvis Is Dead, and it was featured on the John Peel Show. Their first single Banned From The Pubs soon followed and fans and press freaked out in equal measure.

This track is taken from The Longest EP  (that’s not actually an EP; it is a compilation of songs from 1987 to 2009, plus rarities, out of print material and previously unreleased outtakes.) At 31 seconds long perhaps NOFX were too drunk to make it any longer? Hic!

When you’re a few drinks in, there’s something about Celtic Punks Flogging Molly songs that makes you want to sing along at the top of your lungs and dance around pretending that you’re starring in Riverdance… or is that just me?

5: Somebody Put Something In My Drink – Ramones

This song is about a guy who spends his time drinking six-packs of beer, and doing very little else. Rumour has it that this song is about Keith Morris, who fronted Black Flag between 1976 and 1979. Morris admitted that his drinking caused a tension between him and the rest of the band. “Whenever there would be arguments, everyone would be pointing their finger at me, and it would be my fault.”

One of the best feel-good-hardcore-sing-with-your-arms-around-one-another-rock-out-drinking-fighting songs ever! It’s such a good song that the Boston legends even helped brew a beer named after the single. This traditional pub ale also benefits their Claddagh Fund charitable foundation. Be a Barroom Hero yourself and visit claddaghfund.org

1: Too Drunk To Fuck – Dead Kennedys

“Too Drunk to Fuck” is the fourth single by Dead Kennedys and released in May 1981 on Cherry Red Records. The single reached Number 36 in the UK although it was not stocked in some record shops because of its provocative title. It was also the first UK Top 40 single to include the word “fuck” in its title… Naughty!