Berlin Protest Gig: “F**K The Police, And No Pogoing Please!” 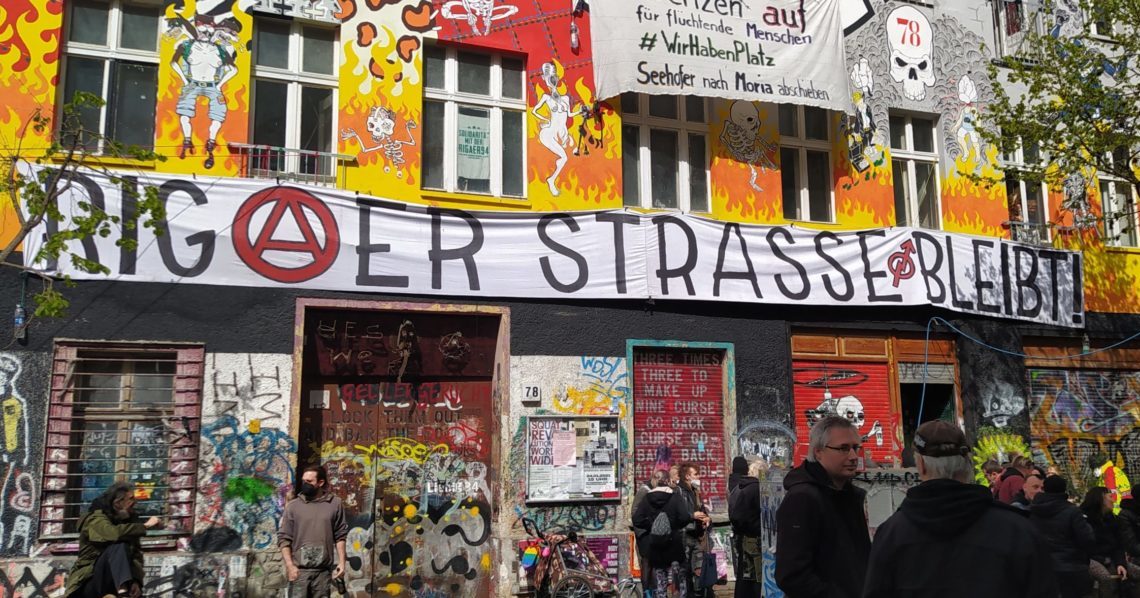 With a heavy police presence, Berliner punks demonstrated yesterday in solidarity with local squats and against gentrification in Berlin’s Friedrichshain district. The protest included gigs by local punk bands. Punktuation’s TeeJay was there.

Germany has been in an ongoing lockdown since November 2020. As if dark and cold Berlin winter wasn’t frustrating enough, the Covid-19 infection rates have been going up and down, lockdown rules have been changing almost weekly, unemployment has been rising, and vaccination advance very slowly.

In a city that used to party like no other, Berlin is not the place to be in the midst of a pandemic. Sadly everything over here seems fragile – the politics, the decisions, the bureaucracy – in fact, everything except the virus itself.

It goes without saying, live music and shows are not allowed, and pubs and venues have been closed for over five months now, with no prospects of anything reopening anytime soon. The representatives of the live industry, like the Alarmstufe Rot, have spent months organising protests and criticising the German government for the lack of clear strategy for the culture sector and for its lack of financial support.

On top of all that, earlier this month, the German Federal Constitutional Court overruled and declared unlawful the so-called Mietendeckel (the rent control law) which froze rents in Berlin for the next five years to combat soaring living costs.

The ruling means that whoever got their rent reduced will have to repay that difference back to the landlord. This translates into deep financial shit for many of us regular mortals.

In this situation, one might easily conclude that rock bottom apparently does have a basement. While some Berliners hope the Senate and the state might jump in to help clear up the mess they created in the first place, the punks decided to join the series of housing protests.

On the corner of Samariterstraße and Rigaer Straße in Berlin’s Friedrichshain district, Berliner punks, and pissed off citizens, gathered (socially distanced and with masks on) to raise their voices against gentrification, against the overall housing conditions, against selling-off the city of Berlin to the greedy real-estate sharks, against oppression, and the uncertain future of so many.

The protesters gathered around the former squat and housing project Rigaer94 and called for solidarity with living spaces and points of gathering which are facing eviction.

Speakers bellowed as the crowds cheered and whistled in support’

“The city of Berlin should represent the interests of its citizens, but they turn the blind eye instead.”

“This is a place of resistance to the neoliberal capitalism and against consumption compulsion.”

“Housing is a basic human right. Stay together. One struggle, one fight.”

It seems that going to a protest is currently the only way to experience live gigs in Germany. It was a weird and somewhat absurd experience fighting for housing rights, with all of our obligatory FFP2 masks on.

It was strange being banned from pogoing, which saw us simultaneously complying with the law while also fighting against the system. Antibastard‘s frontman shouted at the crowd after every song, “Please keep your distance. Otherwise the police will break off this whole thing immediately,” and “fuck the police and, no pogoing please”.

It was the protest against repression in difficult times and under extremely repressive circumstances.

Maybe this pandemic is a once in a lifetime opportunity to wake punk from the dead and redefine it?

Liked This story? Check out these…