Are You Receiving? The story of Killing Joke. 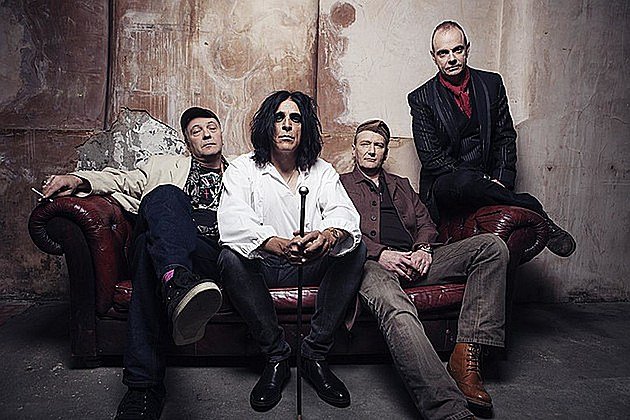 In a new book Finish Author Jyrki ‘Spider’ Hämäläinen charts the highs and lows of one of the most influential British Post-punk bands ever.

Killing Joke are a tour de force in more ways than one- the dark, raw thundering energy of their music matched only by the uncompromising philosophy that underpins their lyrics and personas.

In a career that spans four decades, there are many narratives, perspectives, and events to bring together to present a history of a band that have influenced the likes of Nirvana, Tool and Nine Inch Nails.

A daunting task indeed, but the challenge has been accepted, and now the disparate pieces of their remarkable story have been laid out together in a new biography on the band.

Are You Receiving? is an illuminating and entertaining look at the band’s career, written by Finnish author, journalist, and magazine editor Jyrki ‘Spider’ Hämäläinen.

Charting the band’s triumphs and challenges from their inception in London in 1979 to the release of their most recent studio album Pylon (2015), and then up-to-date with a hint for a new album possibly in 2021, the band’s life has been eventful, to say the least.

In between those points in time is a career packed full of anarchic escapades, musical experimentation, and bombastic personalities- all of which is captured in detail in this new book. We caught up with the author about the process of capturing such an expansive story.

The fact that Are You Receiving? is meticulously researched with an exhaustive catalogue of interview excerpts, recording details and reconstructed events is not a surprise when you consider the influence on the author’s approach:

“Back when I was a university student and an aspiring journalist, I remember reading Marcus Gray’s book about the Clash called “The Last Gang in Town” and that left an impression. I wanted to write an equally well-researched book, so I tried to turn every stone during the research,” Spider says.

The book weaves in quotes from interviews of the time, with more modern reflections on events which gives a unique combination of thoughts captured in the moments over the years, along with later perspectives.

Hämäläinen is no stranger to writing about Killing Joke, having covered them extensively over the years, including a major feature in 2012 for Vive Le Rock. Curating interviews over a period of years, the book contains an impressive array of contributors, which (as well as the original members of the band) includes graphic artists, producers, record label executives and journalists. It was not an easy task to bring all the pieces together:

“The Majority of it was digging through endless amounts of old music magazines, but also the depths of the Internet regarding all sorts of material from text to audio and video along with books that had been written about post-punk and so on,” Spyder admits.

“Having said that, the majority of the interviews are mine, and most are brand new made, especially for the book. To build a truthful account of the band’s history, I, of course quote reviews from the press from the time the albums were first released.

“It is easy to say the band have released landmark albums and are legends, but they’ve had their ups and downs and not everything they have done is pure gold.”

All gold or not, it is undeniable that the band and their output- 15 studio albums spanning 35 years (1980- 2015) at the time of writing – has been a major force in the post-punk era. With so much history and many ups and downs, how can we begin to evaluate the legacy now?

For Hämäläinen, the music, the attitude, and the aesthetic and imagery of the band have contributed to the immense impact they have had on subsequent musicians:

“Back in the day, they might’ve been just another band, but time has been on their side and revealed how genius and unique they really are. They definitely started what is now known as post-punk and have greatly influenced a lot of metal bands.

“A lot of the people said in their interviews they didn’t think we’d be still talking about the band 40 years down the line. Now they’ve been cemented in the history books for sure.”

And Hämäläinen’s work on the band certainly helps turn the story of a turbulent but incredibly creative career into something easily readable. The detail on recording processes and musical output is intricate, with plenty of information to satisfy the music nerd in us all.

But it also really delivers when it comes to personal stories and individual memories of band member shenanigans that serve to break up the technical detail with some light relief. It is these tales- such as the one about bassist Youth being delivered to a recording session in a straight jacket- that really bring to life the exuberance, excitement, and downright crazy life of the band.

Being exposed to such an expansive history of the band, and probably countless great stories must have made it hard to narrow down what would make it to the final word count. When asked about his favourite tale of genius and/or calamity, Hämäläinen says,

“One great quote was from a person, whom I’m not going to name, where their reply to the interview request was “Well they’re all a bunch of nutters…. how’s that for a start!”. And he gave some great stories and insights as well, but I’ll leave those for the book…”

The ethos of the band and their strong values and commitment to their politics and authenticity is also a theme that runs through the book. And in these turbulent times, it is clear that both the band and also the author, think Killing Joke still have a lot to give. In an interview with Invisible Oranges in 2019, frontman Jaz Coleman was clear where he stood:

“So, the world is in a terrible state but that’s why we need Killing Joke. Something I need, we need, and the world needs.”

The introduction to the book talks of the story of Killing Joke as “one of imminent apocalypse and what better time than the Covid pandemic to be reading this”. But as well as lamenting the state of the world as it is, it seems there are also plenty of words of wisdom to be found when immersed in the band’s world:

“There is a quote that I use myself frequently, which comes from the very first interview I did with Jaz Coleman in a hotel just off Hyde Park in 2012, which embodies their philosophy greatly. “Dive into the deep end and start fucking swimming.” You can apply that to anything in life. I sure did when I started writing the book.”

Killing Joke: Are You Receiving? Is a well-researched book and a great read for any fan of Killing Joke – well worth getting your mitts on!

If ya liked this you will love this