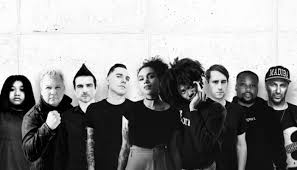 Anti-Flag has released Volume 2 of their protest/benefit single, A Dying Plea, following the release of  Vol. 1 on November 5th. Both volumes of A Dying Plea capture the current state of America and push for social change.

De’Wayne, Marcia Richards (The Skints), Jálise Della Gary, and Tom Morello (Rage Against The Machine) have joined them on the track with the group intending to donate 100% of the songs’ proceeds toward a number of organisations.

Anti-Flag’s Chris No. 2 wrote about the importance of the two songs in an op-ed for Altpress. He said: “In times of social change, in the optimism of protest and the inspiration of direct action, Anti-Flag have always looked to work. To find ways to best provide commentary but to also creatively contribute to the tireless and arduous work of social justice.

“The pandemic has made that process increasingly more difficult and has had us seeking to find what the best use of our band is, of our platform and our art.

“In the wake of the murder of George Floyd, I was talking with my niece (Jálise Della Gary, who appears on A Dying Plea Vol. 1), a 13-year-old, young black girl, seeing the Black Lives Matter movement grow and increasingly becoming activated by things like TikTok. She had mentioned she wanted to work on a song to support and be a part of what is happening around the world. My sister and her fiancé (Jálise’s mother and father) were murdered when she was 11 months old. She lives with my mother in Texas and is at that important moment for any artist when they’re finding who they are and what their voice is. The part she sings in this song is so powerful to me.

Chris No. 2 also spoke about the video’s released for Volume 1 and 2: “The videos for “A Dying Plea Vol. 1 & 2” were created by Keith Ray and Killer Dutch. Keith created two distinct visual stories, capturing the rise of neo-fascism, endless ramp up and further militarization of policing in America. And he created these videos all while running for and winning an election as the new Tribal Secretary of the Paskenta Band Of Nomlaki Indians.

You can read the full op-ed here.

A Dying Plea Volume 2 is available to stream or purchase Now!

Keep up with Anti-Flag News!

If you liked this story you might also enjoy…