And Out Come The Boobs 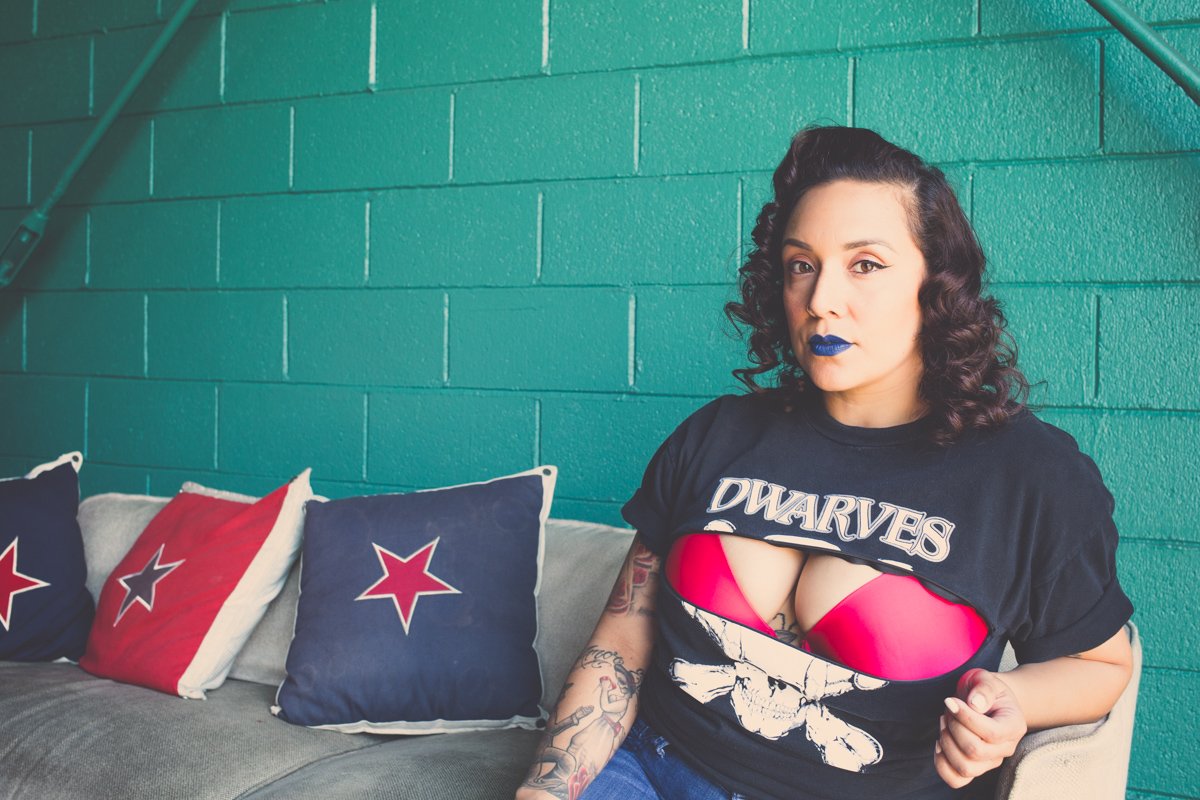 The ‘do-it-yourself’ attitude has always been firmly ingrained in the psyche of the punk mindset. Don’t wait for it to happen. Don’t rely on anyone else to do it for you. Just do it yourself!

It was that perspective, combined with compassion, determination, a core belief in individuality and necessity, that led friends Hannah McFaull and April Hobbs to create a maternity clothing line for punk’s called ‘And Out Come The Boobs’

Their vision – one of providing nursing mums with clothing that helps maintain their own unique identity while balancing the demands of breast feeding, seems to have filled a gap in a market.

“We’re not just about transforming punk shirts, it runs deeper than that,” Hannah explains over the phone from her home in the U.S. “It’s about identify and personal expression. It’s about being in a world where you don’t have to wear what the ‘big box stores’ are selling because you feel there are no other options for you.”

“Punk has always been about connecting with people who don’t want to be a part of that mainstream narrative which is why we’re not just doing breast-feeding shirts.”

If you are someone who lives outside the mainstream, whether it’s because you’re a punk, you’re heavily tattooed or body modified, Hannah believes ‘And Out Come The Boobs’ has something for you.

“For me, punk has always been about connecting with people who don’t want to be a part of that mainstream narrative which is why we’re not just doing breast-feeding shirts. We’re actually enabling folk to continue to be themselves at a time in their life when everything is changing – your body’s changing, it’s leaking at weird times and weird places, but why should that stop you being who you really are?”

The idea to start an online punk maternity fashion range came about when Hannah was moaning about the terrible range of nursing shirts available in high street stores to her dressmaker friend, April.

The girls’ eco and ethical credentials would also make Greta Thunberg proud because their passion to up-cycle (“We don’t want to be adding to the huge amount of shirts that go unworn.”) and the fact that many of the clothes that they sell tend to be gender neutral.

“I found that just wearing a t-shirt with The Clash on it made me feel I could face the world in a different way.  It was like I had Joe Strummer on my shoulder.”

” I suppose that came from us needing it for ourselves,” Hannah admits. ” When we felt the impact of how much pregnancy and motherhood affects your mental health and how much it impacts how you feel about yourself on a day-to-day basis, I found that just wearing a t-shirt with The Clash on it made me feel I could face the world in a different way.  It was like I had Joe Strummer on my shoulder,” Hannah laughs.

“Our tees definitely empower you in a different way. You feel like you have some control over what you’re wearing and how you’re presenting yourself to the world. In so many ways the politics of what we do is very important,” Hannah says.

“We’re just trying to make, as many folk as possible feel connected to their pre-baby self.”

This ethos is something Hannah and April felt they could share with other punk parents who are breast feeding.

“It was like ‘hey, you don’t have to conform, you can still be your wonderful weird self’.  Whether it’s punk or nerd stuff or metal stuff, we’ve done a range of different collections over the couple of years we’ve been going. We’re just trying to make, as many folk as possible feel connected to their pre-baby self.”

Believing that ‘And Out Come The Boobs’ is just about breastfeeding tops alone is like saying The Clash were only ever about the music and not the message.  Hannah has a degree in political science and combine that with April’s creativity and business skills they have also have set their sights on helping those who need it the most in the best possible way they can.

“For me, my love for punk and the fact that it put politics to music, shaped my values and how I see the world. “

“We know that black communities don’t have the same level of support for breastfeeding and lactation consultants as white communities do, and we have a detailed plan for financial support to fund Black birth workers and doulas in a longterm, sustainable way. “

Growing up in the UK Hannah’s ‘Punk pedigree’ is strong. Her dad Colin McFaull, is the lead singer and founding member of Cock Sparrer  and her brother TJ is in The Barstool Preachers.

“There weren’t many other seven year olds who knew the words to White Riot and could name every member of the Ramones. “

“Yeah, I think it wasn’t something we were aware of growing up,” Hannah admits. “But there weren’t many other seven year olds who knew the words to White Riot and could name every member of the Ramones.“Hannah says her punk upbringing was paramount in forming her outlook on life and Poly Styrene, in particular, was a strong influence on her approach to business.

“Poly wasn’t going to conform to what other people were telling her was punk and I really like that approach to define who you are and being a personal expression of self. “

Hannah also believes that many women in the professional world have been conditioned to not go in and do things for themselves. As Poly Styrene once screamed “Some people think little girls should be seen and not heard, but I say, ‘Oh, Bondage, up yours!”

…and their vision for the future?

“We’re going to continue to up-cycle punk and band shirts we’ve collected or had donated to us – that’s not going to change and we have some new collections coming out in the next few months. “