Afro Punk’s FISHBONE Come Together For Collaboration with FAT MIKE 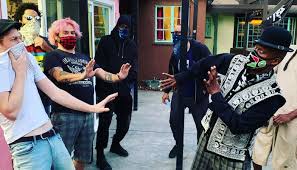 Since their inception in 1979, L.A. band Fishbone have brilliantly combine genre’s that seem to sit at polar opposites – punk energy with a ska cadence, occasionally wired together with metal guitar with a hint of R&B grooves. It sounds insane, but it works. The band members themselves came together in a way similar to their music. after recently making amends after years of lawsuits and disagreements.

Keyboardist, trombonist and songwriter, Chris Dowd, is also a fully qualified chef, and his comparison of the bands musical dynamics fit in well with his ‘hollandaise sauce analogy’

“You’re taking an egg and some olive oil. Two components that wouldn’t mix together,” he explains, “but you whisk it together a certain way, and that causes it to bond.”

The band have chosen producer and NOFX frontman Fat Mike to meticulously blend their volatile mix of sounds into a delicious fusion. With an ‘almost original’ line up (founding guitarist Kendall Jones was not on board for the reunion) sees lead singer and sax player Angelo Moore reunited with bassist Norwood Fisher, drummer, Philip “Fish” Fisher, trumpet player Walter Kibby and Chris Dowd! The anticipation for what’s to come is more than enough to have fans hanging on for a release date.

According to Dowd, the sound of the “yet to be named’ up coming album is “still evolving” but says it will be “very political”. In a recent interview with AltPress Dowd was asked about their reasons for choosing Mike to work with on the album. Was it for his expertise with sound or did they need him to be more like a diplomat, to keep everyone working toward the same goal?

“Definitely diplomat,” says Dowd, “But I will say this: It’s a combo platter, too. He’s definitely got strong opinions about what he is and isn’t feeling. But we definitely have strong feelings about what we are and aren’t going to be bargained with, too. I feel like Mike is doing this Fishbone album going, ‘What the fuck was I thinking?” For real: It’s a six-headed monster.”

Keep on top of Fishbone news…