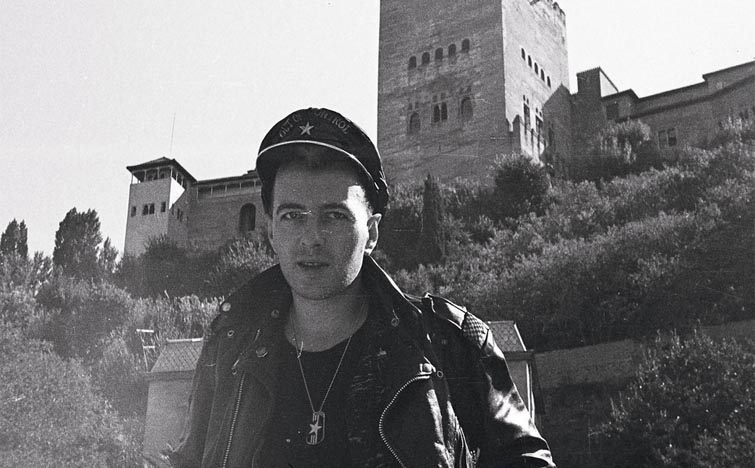 On the 16th January 2013 the Spanish city of Granada in Andalusia, Spain announced that Joe Strummer was to have one of its city squares named after him.

“He liked the city a lot,” said Strummer’s friend Esperanza Romero, who first took Strummer to what would become one of his favourite cities. “For me, he was like a soul brother.”

Romero and Strummer shared a squat at 101 Walterton Road, Maida Vale when Joe was a struggling musician, and her sister Paloma was the future Clash singer’s girlfriend – and went on to become Palmolive, the drummer in the Slits.

Paloma and her sister introduced Joe to the culture of southern Andalusia and the work of Granada’s most famous poet, Federico García Lorca, who was shot by a rightwing death squad during the Spanish civil war and buried in an unmarked grave

Strummer later included Lorca and Granada in his 1979 song Spanish Bombs on the London Calling album, and once tried to find and dig up the poet’s grave. “He was very interested in anything that had the smell of freedom and of revolution,” Esperanza said.

After Strummer and Simonon sacked Mick Jones in 1983, the Clash began to fall apart and Strummer sought refuge in Granada. It took the locals while to recognise the famous musician who had made their city his adopted home.

“At first I thought he was some drunk,” said José Ignacio Lapido, famed rock guitarist and singer, songwriter, in Spanish rock band 091 – who got to know Strummer when the Clash frontman produced one of their albums.

Strummer was in Granada when critics slated This is England, the single from the band’s final album, Cut the Crap.

“I just went, ‘Well fuck this,’ and fucked off to the mountains of Spain to sit sobbing under a palm tree,” Strummer said a few years later.

Strummer’s name eventually entered Granada folklore as a famous figure in the city’s musical history. After Strummer’s death locals started a Facebook petition, which was then taken up by a city councillor.

It turned out that even Granada’s Conservative-run city hall contained some Clash fans because the council voted to change the name of the square in Strummer’s honour.

Strummer wrote in Spanish Bombs: “Spanish songs in Granada, oh ma corazón” (which translates as ‘In my heart’) Now it is Strummer’s name in Granada and, in the city’s heart.

Liked this punk story? Check these.