Move Over Paul Cook and Rat Scabies – There’s a New Kid on the Block! 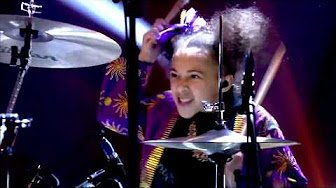 10 year old Nandi Bushell, who shot to Internet fame late last year playing along to Nirvana’s In Bloom says she has discovered punk and loves it.

Nandi is like most ten year old girls in many respects but not many girls (or for that matter, many people) can claim that they have; Jammed with Lenny Kravitz at the O2 Arena, are respected as a drummer by David Grohl, have appeared on the Ellen DeGeneres show and fronted a national TV Christmas advertising campaign by UK retailer Argos – but Nadi has.

The 10 year old from Ipswich in the UK, (who must simply have the coolest parents in the word) became a viral internet star covering Nirvana’s in Bloom – which now has been viewed 10 million times on Twitter. Her contagious enthusiasm sees her screaming along with the track while accompanying the drum track – which she played so well it saw former Nirvana drummer Dave Grohl ‘throwing up the horns’ in appreciation.

Rage Against the Machine guitarist Tom Morello, even sent her one of his guitars after watching her cover their 1999 anthem “Guerrilla Radio.”

“Hey Nandi, this is Tom Morello. I’d like you to have this guitar as a gift from me to you because you rock so great and to see someone rocking so great who is so young really gives me hope for the future,” Morello said in his video to the young rock star.

“I look forward to hearing a lot more of your music in the future. You’ve got a lot of soul and here’s a little soul power to go with it.”

“Hey Nandi, this is Tom Morello. I’d like you to have this guitar as a gift from me to you because you rock so great and to see someone rocking so great who is so young really gives me hope for the future,”

Tom Morello – Rage Against The Machine

In her latest Twitter post Nandi says “Today I learnt about #Punk music. This song is called ‘Anarchy in the UK’ by the Sex Pistols. Anything goes with PUNK! We made this British Flag shirt because I am #British and so are the #sexpistols #afropunk @afropunk“

Nandi has simply got to be the coolest punk drummer in the world – expect to hear a lot more from her in the future.

Seriously, it might be time to hang up those drum sticks, Paul Cook and Rat Scabies!